It's the last Thursday in November, and the one holiday I really quite like in the USA - Thanksgiving Day. Being grateful for what one's got should be a daily rather than an annual thing, of course, but it is nice to have a full day off work to really reflect on how not so empty my glass is, even without comparing it with ones belonging to others.

It wasn't so many years ago that good health was not something I could take for granted. I still remember not being able to walk a city block without stopping to lean on my cane and gasp for air, having all the joints going thermonuclear at all hours of the day, and being so tired that getting to the safety of the opposite sidewalk while crossing the street felt like the last mile of an ultra-marathon in the waterless Sahara. 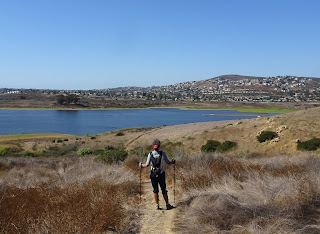 My health isn't perfect now, and I have to really force myself to exercise when I don't want to (and that is more often than not). But I've finished two consecutive Belgian Wafer Rides, ridden 4 solo rando permanents, commute everywhere almost exclusively by bike, cycled up both the highest and the steepest paved roads in the county, hiked many rugged miles with my buddy, and even given a good impression of an Energizer Bunny at my workplace. It's all a lot of work that isn't always even slightly pleasant, but every bit of it is worth it.

Use it or lose it, my oncologist mom used to say. And, darn if she isn't right. I may bitch about things, still, but at least I do have the energy left to bitch - for which I am very grateful! 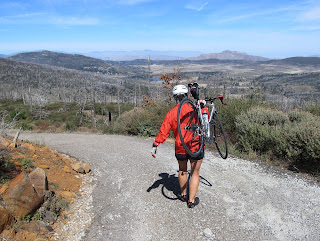 Luck, has also been on my side so far. No, I haven't won the lottery or anything. But, to be on foot or on bicycle in traffic almost everyday in the USA for 8 years now and still haven't gotten hit by any car yet takes just about as much luck as it does constant vigilance and skills. 2019 has been a terrible year in my cycling family accident-wise. You can do all the right thing, and still get broadsided by inattentive driver. A few of my friends separately ran out of luck this year. Now one is dead, one paralyzed, and another still recovering from spinal fracture.

When people take their eye off the road while going 55 mph, they cover just over 80 feet every second completely blind to where their car is heading. That's over half a football field every 3 seconds. There isn't much I would be able to do if a driver drifts into me at that speed, even if I see them coming in my helmet-mounted rear-view mirror.

Needless to say, though, being situationally aware and taking all possible caution decreases one's chance of being hit, or hitting something on the road. But sometimes it is just down to luck to not be in the path of a car that isn't being carefully driven, or to not have a suicidal squirrel squirrels into your front wheel and sends you flying off to who-knows-where when it locks up and does an impromptu endo. 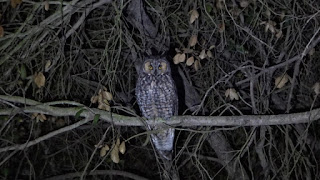 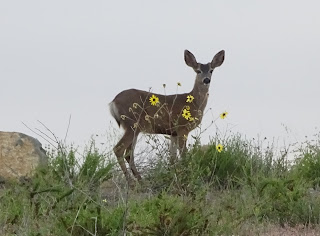 I'm also very grateful for all my friends and family, and even to people I'm not friendly with. The former are amazing support in good and bad times. The latter keep me humble and challenge me to consider different viewpoints, and, in some extreme cases, really increases my appreciation of the more ethical human beings. Contrast is important in life. As Satan/Woland says in one of my all time favorite books;


What would your good do if evil didn't exist, and what would the earth look like if all the shadows disappeared? After all, shadows also come from trees and from living beings. Do you want to strip the earth of all trees and living things just because of your fantasy of enjoying naked light? - Mikhail Bulgakov, Master and Margarita


There are many mundane little things, and many more substantial things that I am grateful of, of course, but who has time to read this when there are turkeys and green beans and stuffing and many other things in the oven and on the stoves to keep an eye on today? This has already gone on long enough, so I'll just stop now and wish everyone a very Happy Thanksgiving with many things to be grateful of all year long.
Posted by Smorg at 10:28 AM No comments: Links to this post

Email ThisBlogThis!Share to TwitterShare to FacebookShare to Pinterest
Labels: Just a thought

A couple of weeks ago my roommate's dog and I ran into a mom and daughter pair of local artists out painting an electrical box nearby on our morning walk. 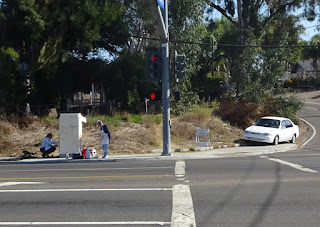 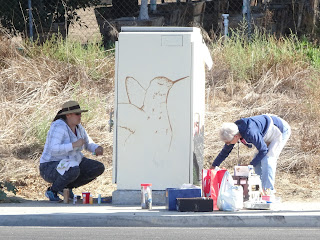 We stopped to say hello and admired their work a bit before resuming our search for more hills to burn some energy off.

I didn't see them last week, but passed by again yesterday, and here is the finished work. 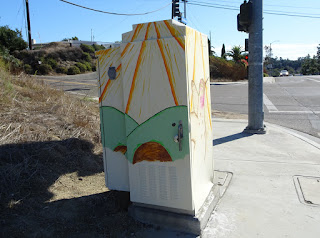 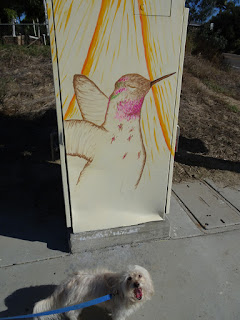 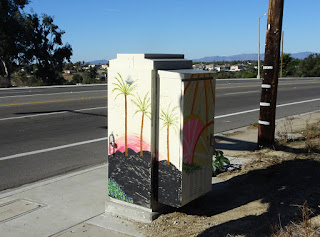 It's amazing what a touch of artistry can do to a formerly dull street corner. Thanks a bunch to the volunteers out cleaning up and beautifying the town. They're like a quiet army of real life fairies that makes good things happen for everyone!
Posted by Smorg at 8:02 AM No comments: Links to this post

Another day, another mass shooting in the USA

Consider this, Americans had worked up enough political will to repeal a constitution amendment once... so that they can legally drink alcohols again.

How many innocent people have died from gun violence compared to mob hits?

Shootings in malls, in theaters, in school, college, daycare, festivals, concerts, workplace, night clubs, restaurants, etc. But, no, no amount of innocent deaths everyday of the year is suffice for our politicians to summon the will to repeal the 2nd and pass meaningful gun control laws. It is way too easy for just about anyone to obtain and keep assault weapons here. They may think they are the good guys, but then when they get upset, there's the automatic weapon there for them to use to vent their anger on other people.


There is no safe place in the USA. Even the cops are living in constant fear of getting shot, that a whole lot of them seems to have gone to the shoot first policy. Hand on the gun all the time. In every other civilized country, cops are good at de-escalation. Here, it's escalation all the time, pulling the gun out like crazy at every little thing.

There has been 251 mass shootings since January 1st, 2019.  Today is only the year's 216th day. My goodness me, I might be safer living in Columbia than here.

Posted by Smorg at 3:44 PM No comments: Links to this post

I consider myself lucky to have grown up before the age of the smart phones. It's amazing how many people I know here would sit indoor and stare at pictures like these on their smart phone screen, when the place the photos are from is only a mile and a bit away. 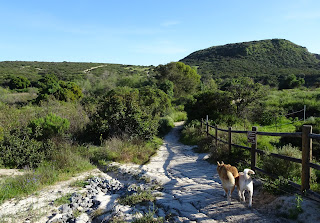 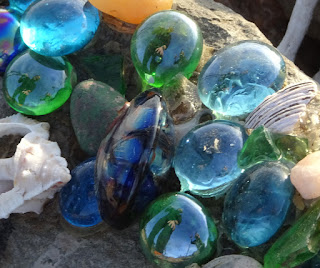 My friend Cornelia and I have been hiking all over the preserve once a week for the past year or so. It's a cherished active decompression time from work and other not-so-uplifting news we hear daily. It isn't always a pleasure hike. The terrains here can be very gnarly, the overgrown vegetation gives cover to many stingy insects and sometimes moody snakes (though, luckily, we somehow haven't come face to face with those legless critters this year), and the summer heat this year seems more humid than ever. 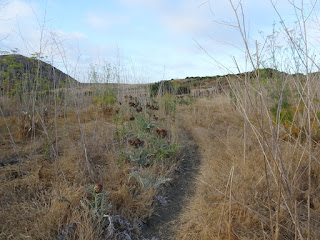 But, there is also nothing quite as therapeutic as a good and strenuous nature hike with a cheerful pal where we regularly run into wild critters doing all sorts of crittery antics. 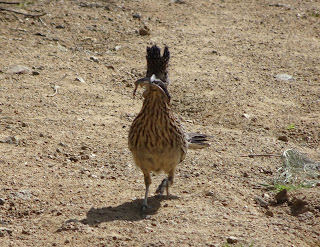 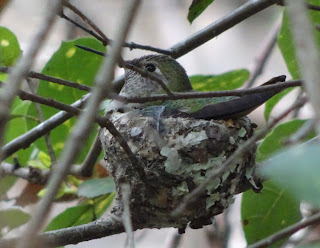 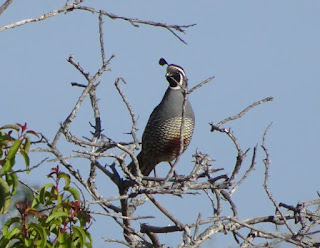 Huffing and puffing in the clean air under a big sky while dodging the many manifestations of the ubiquitous poison oaks, loose rocks, and sweat-loving gnats (tho the latter mostly avoid me, thanks to my Picaridin bug repellent lotion) is a great way of keeping the pudge off while gaining time to put things in perspectives.

It's great to be able to see pictures and watch videos of people and places on the other side of the oceans. But it's even better going out into the nearest wild and experiencing first hand the non-digitized landscape around you. Then, you know what you have to lose, if you don't take care of your own surroundings. 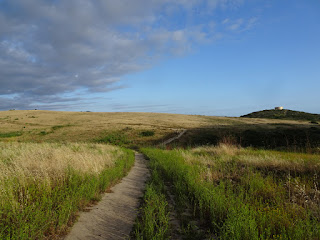 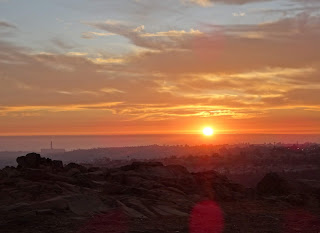 Sep 4th, 2019: Edit to add - another upside to going hiking; nature preserves are among the very few places left in the USA that hasn't been shot up by an American gun nut... I mean, they've done malls, concerts, all sorts of school, churches, synagogues, mosques, and even daycare. You're much safer going hanging with rattlesnakes than with gun-packing assholes.
Posted by Smorg at 2:52 PM No comments: Links to this post

Email ThisBlogThis!Share to TwitterShare to FacebookShare to Pinterest
Labels: Just a thought