The following review of the current run of Verdi's Rigoletto (with particular attention on our mutual favorite singer, Vesselina Kasarova) in Paris is guest-posted here courtesy of John Carnegie of Scotland. Thanks very much, John!

Through shuffling round work assignments, I managed to attend the second performance of the Opéra National de Paris’s new production of Verdi’s Rigoletto at their unlovely Opéra Bastille venue – a vast and gloomy barn of a building that makes the New York MET seem almost intimate by comparison.

Vesselina Kasarova was billed to play the comparatively minor role of Maddalena, the assassin’s sister/accomplice who causes the downfall of the title character and his daughter by succumbing to the charms of the opera’s philandering baddie, the Duke.  Given that Maddalena does not show up on stage until the very last scene of a long evening and that VK had cancelled her announced appearances on the two previous occasions that I had booked to see her, there was always a doubt in my mind as to whether she would turn up this time for a task that might seem somewhat beneath her.  On the other hand, the fact that Maddalena is a prominent participant in the Quartet (for my money, the single most sublime passage of music in the whole history of opera) made for a compelling reason to hope against hope that VK might actually appear.  Well, she did and to great effect.

Before one got through to her eventual entrance, however, one had to surmount the hurdles of the visuals on offer.  Claus Guth was on directing duties and his typically high concept piece of “regie-theater” proved to be a very mixed blessing.  The curtain rose at the start to reveal the figure of “Rigoletto’s Double”, a mimed role who represented Rigoletto looking back retrospectively on the events of the opera by mourning over the contents of a brown cardboard box he carried: his ex-jester’s costume and the blood-stained robe of his deceased daughter.  This distracting figure was onstage throughout the evening and his non-stop gurning succeeded in constantly pulling the focus from Quinn Kelsey’s portrayal of the singing version of the title character.


As the set unfurled around the “Double”, it quickly became evident that it represented a gigantic sideways version of the cardboard box he carried.  Brown cardboard is a very drab surface indeed and (combined with mostly monochrome costumes) made for a visually dull experience.  However, that proved to VK’s great benefit.  When she made her entrance in sparkling black thigh-high boots, a tight-fitting jump suit surmounted by a top hat a la Marlene Dietrich and carrying off a choreographed Las Vegas-inspired routine backed by a bevy of half-naked showgirls, this was the first visual excitement of the evening and the audience rose to the spectacle and VK’s panache in accomplishing it.  This compensated for the fact that she was having to deal with the inconsiderate accompaniment of Nicola Luisotti – one of the breed of conductors whose head is mostly in the score and rarely paying attention to the performers on the stage.  He spent much of the evening drowning out the singers with his vast orchestra.  Fortunately, VK managed to gradually overcome this unwarranted competition – first in a very telling contribution to the Quartet and then in her successful attempt to put some backbone into Rafał Siwek’s dour assassin.  Her portrayal could definitely be counted as a success and was richly rewarded with the audience’s applause at the curtain call.

As for the three principal roles, Quinn Kelsey made for a touching Rigoletto and often managed to command the stage (despite the distractions of his “Double”).  Michael Fabiano’s Duke was a less compelling assumption and was the singer who suffered most from being swamped by the orchestra.  Still, he perked up greatly in the last act – spurred on perhaps by the attentions of VK and the dancing showgirls.  The star of the evening though was Olga Peretyatko’s Gilda: pin-sharp in her coloratura and hugely affecting throughout.  Her final appearance was particularly moving.  In one of Herr Guth’s happier inventions, Gilda does not spend her last minutes onstage in a sack but as a disembodied spirit diagonally traversing the stage as she disappears from her father into eternity.  It was not just Ms Peretyatko’s nationality, talent and looks but also her manner that brought to mind a young Anna Netrebko.  The packed audience took her to their collective hearts and gave her a huge round of applause at the curtain call.  It was notable that VK (who has always been demonstrably appreciative of her fellow performers onstage) was particularly enthusiastic in her applause for Ms Peretyatko. 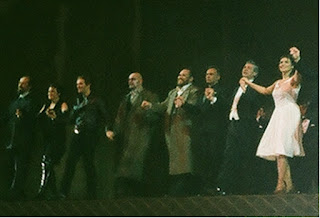 The current run of performances of Rigoletto in Paris is playing through to the end of May and VK (unlike her fellow principals) is scheduled to appear in all of them.  If you go on the 14th and 30th of May, you will not get the benefit of Ms Peretyatko’s Gilda but you will at least be spared Mr Luisotti’s conducting.  So, is it worth braving the travails of getting through the oppressive security arrangements of contemporary Paris (post Charlie Hebdo, the most militarised city in the western world) and enduring some of the vagaries of Herr Guth’s production?  On the whole (and particularly for VK and Olga Peretyatko), I would say yes.