Email ThisBlogThis!Share to TwitterShare to FacebookShare to Pinterest
Labels: animals, Around town

Can you use some dark hot voice and infectious personality to warm a chilly winter day with? So can I! Here is the (sadly rarely seen on stage anymore) talented Juliette Galstian as opera's most famous tuneful gypsy.


Does Carmen ever come better intoned than this? It's a shame Mme Galstian is spending more time teaching than singing on the operatic stages now. Lucky for her students, but not for us audience at large!
Posted by Smorg at 2:34 PM No comments:

The end of 2013 brought a particularly cool friend into town, and, lucky me, Dr T had recovered from her cold and had an afternoon free to visit! With the weather being accommodatingly clear and warm out we decided that we both could use a little exercise and headed east to explore Mission Trails Regional Park for a few hours.
I should confess that though I have cycled through Mission Trails Park many times I had only ever hiked it once, many many moons ago when I still cane-dependent, and so am not terribly familiar with the park's many trails. To be safe, we stopped in at park headquarter to pick up a trail map and ran into a really helpful park docent who pulled out the map, a pencil, and then proceeded to describe in detail his favorite 'little romp' for us to follow. Our less-fat-than-average look sort of worked against us as our enthusiastic guide plotted our way UP South Fortuna Mtn and traversing it to the Fortuna Saddle before heading back down through Suycott Wash. All my mountainous century bike rides of the past year have made mountains seem less formidable for me of late, but the talk of steep terrains and 300+ rock steps that are much better scaling up than descending down was a bit unsettling. Neither of us are known for shying away from any adventure (especially when there's an audience looking on), however, so off we went to find the Visitor Center Loop trail head at Mission Gorge Rd and Jackson Dr before proceeding down the wide dirt road to the San Diego River.

We were a bit too instructed on how to cross the river the least wet way possible, I'm afraid, and ended up crossing it at the wrong spot because the right place looked very much, to our untrained eyes, like the the place our guide had told us to avoid! Some moderate amount of bushwacking ensued before we popped out on the trail again, serendipitously right at a sign warning hikers not to stray off the marked path!

From then on we managed to stay on the, er, straight (ahem!) and narrow path, so to speak for the rest of the hike. The gravelly trail led us steeply up toward the landmark white tower before we picked up the S Fortuna Trail east down to the wash.

One of the things I had learnt from my many long distance cycling expeditions is to note pavement condition on the opposite side of the road when on an out-and-back route... So the steepness of our descent into Suycott Wash concerned me a bit as we'd have to climb back up it toward the end of our hike. I had not chosen my footwear very wisely and my well worn soles weren't gripping the trail very well.
We soon reached the bottom, though, and found the promised two picnic tables hiding in the shades. Starting up the gentle lower slope of S Fortuna Mountain I was busy finding a good spot to place my cane when Dr T let out a gasp. It was a fat little roadrunner running across the path just a few yards ahead! That quite perked up both Dr T and me. No matter how the hike turned out, at least we had spotted a wildlife up close. I was still relishing that thought a few minutes later when Dr T let out another yelp... I looked up just in time to see a coyote running up the trail ahead of us and disappearing behind some boulders! First a roadrunner then a coyote... Real life is just like cartoon sometimes!

By the time we got to the lower steps up S Fortuna Mtn I was getting quite warm and very grateful for my insulated cycling water bottle... and for the cane! Since I took up cycling almost two years ago my balance and stamina have improved a lot, but I'd still soon deteriorate to a drunkard's walk if I try to go more than a mile on my feet without using a stick. Now as the hike was turning into a climb, I don't think I'd have made it all the way up the mountain without my third leg (and Dr T's endless patience!). The upper part of the steps was really steep and eroded. I really wouldn't have liked to descend down the same path! 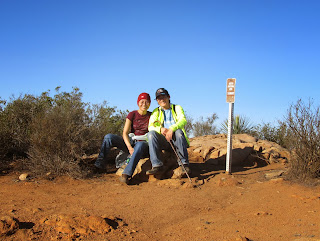 As we cleared the steps and neared the crest of the climb Dr T let out another yelp. By this time I had learnt to associate her yelps with photographing opportunity, so I got the camera out just in time to catch a little bit of our second coyote of the hike... disappearing behind a set of boulder and surrounding bushes!
The view from the top of S Fortuna Mtn was pretty good (though I think it was better at the top of the steps than at the summit itself). We might have lingered there a bit longer, but didn't want to risk not making it back to the car by 5pm, when the gates would be locked, so we started down to Fortuna Saddle...
And then down what turned out to be the most hazardous bit of the day's hike, the steep and very slippery descend into Suycott Wash. Really, folks, don't do this thing without having on a good pair of hiking shoes. It's so eroded and bare and steep that I had a hard time zigzagging down without turning into a human tumbleweed! Once down to Rock Garden Trail (formerly known as Suycott Trail) we sped along nicely and was back at the San Diego River in time to catch the local flora in some really splendid light.

We even had 30 minutes or so to spent browsing around the park's visitor center museum. It's quite a cool space!
Our nice park docent was still around and came over for good (and mostly educational) chats. I particularly liked the collection of stuffed local wildlife on the second floor... seeing as their live version are so good at disappearing in the presence of my camera! One of the 'stuffed animals' is a fake, though. If you're ever in town, drop in at Mission Trails Park HQ and see if you can tell which!

Email ThisBlogThis!Share to TwitterShare to FacebookShare to Pinterest
Labels: Around town, nature, off the main road, san diego

I have a thing for switchback turns on narrow country roads...

I wonder what a psychologist would have to say about that. An incurably twisted personality? A fixation on the now rather than the future?
I like climbing up and descending down switchback curves, with the road ahead only revealing itself to me a little bit at a time as I round its corners. Switchbacks are almost only found on mountainous roads, of course. Their sharp turns cut down the road gradient on steep routes up mountain ridges and faces.
In a way, not being able to see far ahead makes many of San Diego's tough mountain road climbs seem more manageable. I get pretty demoralized sometimes when I look up and the climb seems keen on continuing on forever.

The tighter the switchbacks, the more to keep me occupied with what I have to do right now. It's like living in a perpetual survival mode...

Of course, one can't live like that forever. There's only so much psych to wear down before you blow...
Luckily, this isn't the Alps or the Andes, and there is no road going higher than 6500 ft or so in San Diego County. You might suffer for an hour or two at the most, but all climbs do end... usually before your reserve runs out. And then... the view... and the twisty downhill that a cyclist doesn't have to worry about keeping to the right edge of the road while descending. We are more maneuverable than cars, and it's easy to hold the same speed (or even faster) navigating the curvy downhills as those big lumbering machines do.
The same exhilaration experienced by Leonardo DiCaprio's character in Titanic as he perches on the nose of the ocean liner, breaking into the fair wind like 'the king of the world'... without having to buy an ocean cruising ticket or win a card game and then getting sunk by an ice burg in a frigid ocean.... or something like that.
Posted by Smorg at 1:41 PM 3 comments: