I was up in La Jolla again a week or so ago and decided to ride back to town on Morena Blvd from its northern terminus to the southern, with my camera in hand on the video mode: 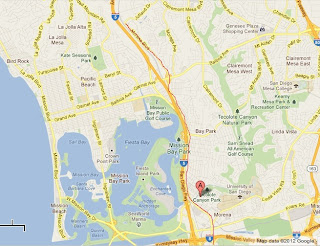 As you can see, it's a rather uneventful straight road. I bicycle on the lower portion of it (between Balboa/Garnet and Taylor St) quite often, either to access the Ocean Beach Bike Path from Old Town to the ocean or to get back to town from La Jolla after a much more interesting ride down Rose Canyon Bike Path (but don't want to navigate through the always busy bike/pedestrian path along Mission Bay). Riding south on Morena is mostly downhill all the way, with some really nice view of Mission Bay across the railroad and I-5 to the right (west) side of the road. On the left is the hills dotted with some houses and mostly business buildings.

I'm afraid the video resolution is rather low and nothing spectacular happened (whew!). I should note, though, that though just about all the maps I've looked at both online and on paper shows that Morena Blvd can be accessed from Clairemont Mesa Blvd via Jutland Dr, Jutland itself does not directly intersect Clairemont Mesa Blvd... but via Luna Avenue. I would tape the southern end of Morena as it goes across the river and into Old Town, but I haven't got a hand-free camera and that section isn't safe to navigate while distracted and one-handed (there are freeway ramps to merge with there). Maybe I'll get a helmet cam one of these days and correct that omission.

Once you get past the Clairemont Dr overpass the bike lane is in great shape. Between that and Garnet/Balboa Ave, though, it is atrocious with lots of debris and icky surface bumps (especially next to trees... the roots are busting up the pavement from below, I think).
Posted by Smorg at 12:41 PM 2 comments:

Email ThisBlogThis!Share to TwitterShare to FacebookShare to Pinterest
Labels: Around town, bicycling, friends

Just A Thought: When Atheists Are Ugly...

I'm an equal opportunity dissenter. As much as the evangelical/radical Christians irritate me when they do something like ambushing people at the only in/out access to a non-religious concert venue or picketing at funerals of gays or other people whose lifestyle they presume to disapprove of or attempting to force kids in public schools to study their religious creation myth in science classes or using political/social/financial influence to try to force their religious dogma on the general public, etc: 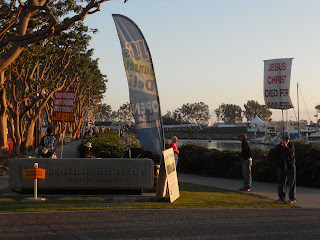 I'm even more irritated when atheists do something like this (the Friendly Atheist's gleeful bashing of Chuck Colson upon learning of his death a few hours before). And that the majority of atheists who turned up to comment on this article are cheering him on rather than calling him out for it only adds insult to the injury.

No, this spitting on a freshly dead 'enemy' even before his corpse got cold doesn't compare to what many religious people have done on the indecency scale, but since when is it okay to behave like a bunch of morally depraved folks just because you think the other folks would do the same hideous thing or worse? Do what those you condemn would do, and you yield any high ground you might have had on them. Shame.... godless or not.
Posted by Smorg at 12:15 PM 2 comments:

Happy Earth Day, Earthlings! Apparently Earth Day is not just a day dedicated to Mother Earth and conservation anymore, but has attained a sort of holiday status among many. I would seriously run out of fingers and toes if I try to count how many time I was wished a 'Happy Earth Day!' today. Not that there is anything wrong with that. If only more holidays could be so universally appreciated (or at least appreciable... After all, there's only one earth we can live on, and we all have to share it!)!
The big Earth Day celebration here in town is, of course, at Balboa Park. Having a little break in between work assignments this weekend, I hopped on the mountain bike and pedaled over to soak in the scene a bit. The place was already pretty busy at 9:30AM, so I was contemplating finding a place to park my fat wheels before proceeding on foot (lest I run over a baby or a dog while distracted by something else) when I spotted a roped off section of the lawn by the Casa del Prado with a 'Bicycle Parking Valet' sign on it. How cool was that??? The San Diego County Bicycle Coalition volunteers, a really friendly bunch of people, registered my bike, parked it and watched over it (and others) while I went out enjoying the festivities. They even provided area biking maps for free! Gosh knows you can't know too many bike-friendly routes around this town.
El Prado, the park's main pedestrian thoroughfare was lined with vendors of various shades of green. It can be a bit dangerous browsing through these. If you don't watch it you'll end up signing a bunch of petitions supporting various green and/or environmentally friendly causes. Not that supporting worthy causes isn't good, but I'm a tad paranoid about giving out my contact info to organizations.

I wouldn't have minded giving my contact info to this free-loving and irresistibly cute Bonita Blue Bin, however... 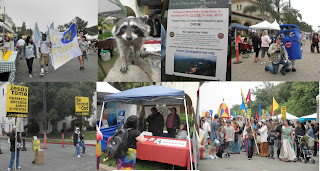 I mean... look at her. Isn't she the perkiest Earth Day party-er you've ever seen (aside from your own kids, that is)??? She took one look at me and tried to recycle me on the spot (thankfully nobody took a picture of it... wouldn't want a foto of me getting swallowed up by a blue recycling bin floating around on the internet now, would I?). Mesmerized, I felt a sudden mad urge to propose on the spot, but some other old geezer beat me to it, so I went off to pet the stuffed raccoon at the Friends of the Laguna Mountains tent instead... 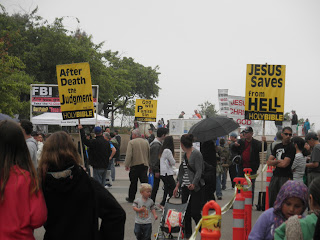 Alas, it wasn't all happy a celebration. A bunch of evangelical Christians turned up trying to scare the crowd into conversion via threats of hell and eternal punishment. 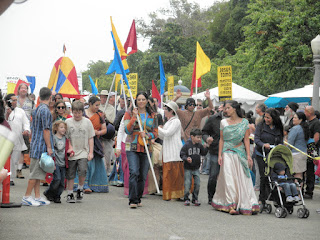 Compared to the passive and cheery Hare Krishna nearby, they were something of a killjoy, I'm afraid. The Christian leader dude got so carried away drowning everyone out by his amplified preaching that a few unwilling audience took offense and told him to cut it out (I spotted one of them telling the park police about it a bit later). I'm sure even this preacher guy and his crew meant well, but their tactics really didn't come off well. The Hare Krishna folks didn't try to evangelize at all, and drew a much more positive crowd reactions.

There was a parade, of course. I didn't follow them beyond the Plaza de Panama (that big round-about where the Museum of Art is), though. It was already almost noon and I wanted to ride on a bit and stop by to see the Maritime Museum's San Salvador Build Site, so I went back to reclaim my bike and took off.
Posted by Smorg at 9:13 PM 2 comments: