I was roaming around the internet looking for posting of this old Southern Thai folklore of Ta Khao Mong-lai that I heard about when I was a kid. The problem is that I don't have Thai character keyboard and am probably misspelling the English transliteration of the name (Thai folks do have weird way of spell their name in English)...
Ta Khao Mong-lai legend is a local tale linked to the geographical features in Thailand. There is a mountain called Khao Ta Mong-lai (Khao is Thai for 'Mount'), and he has a wife (one of the mountains in Northern Thailand that looks like a woman laying supine with her flowing hair spreading in little mountain ridges, a few strands of which extend into Myanmar).
I once visited a cabin (more like a bungalow, actually) by the sea close to Mong-lai's supposed house pets, Cat Island and Mouse Island (Koh Maew and Koh Hnu). They are little islets in a half-moon bay that are so closed together that if you walk the length of the bay from east to west while looking at the islets you'd see the cat catching up with the mouse and swallowing it head-first. And if you reverse direction, the cat has a serious case of indigestion and vomits the mouse back out!). I had always loved listening to the locals and their stories, and it was fun riding around the Thai countryside while being narrated this tale and having the different mountains or islands or lakes that inspired the story pointed out to me.
Anyhow... I haven't found that legend online yet (I don't remember much of it now)... but I did find a few other Thai legends/folklores I heard about during my stay in Bangkok in the late 80's. Here is one:
This is Nang Peeseusamood (roughly Madame Oceanbutterfly), a character from the famous Thai epic poem, Pra Apaimanee (พระอภัยมณี). Look rather intimidating, doesn't she? She is a much softer heart than she looks, though. There's a snippet of the poem describing her underneath the cartoon rendition (couldn't cut and paste the Thai writing, so you'll just have to look at it via the photo):

"She, a big-eyed giantess with bad temper ----  Ugly face with polite speech, a misfit!
the two breasts hanging wild like sarongs ----  even the husband is wary of her unpleasant look."

"Madame Oceanbutterfly is a giantess living in a cave in the middle of the ocean. She can magically transform herself into an enchantingly beautiful woman. In her previous incarnation she was blessed by Vishnu so that she could remove her heart and keep it in a rock for safekeeping. She became arrogant and picked a fight with Fire. Her body was burn by acrid flame, and she became this specter haunting the rock where her heart is kept. Over hundreds of years, the rock that houses her heart sprouted arms, legs, and a face, and eventually sprang into life. One day she spotted Pra Apaimanee and immediately fell in love with him. She took him to live with her at her cave and bore him a son called Sinsamood (Oceantreasure). One day Pra Apaimanee and Sinsamood ran away to shore. Mme Oceanbutterfly followed them out of love, but is killed by Pra Apaimanee's magical recorder playing. She turned into a chunk of stone forever marking the beachhead where she died."
Youtube video posted by Saksiri2498
It had been a long time since I read this epic poem, so I was pleasantly surprised to find the same concept used in this really old Thai tale (Suntorn Poo started composing it around 1822) that popped up in the Harry Potter books. Horcrux! Mme Oceanbutterfly lived on after her body was burned to ashes because she was allowed to keep her heart in a rock (and then, like Lord Voldemort, she manages to return to life a while later from that same rock/horcrux).

Oh... since we're doing Thailand stuff, I got around to making pork satay last week and video-taped the process. It's pretty easy, thanks to Lobo Satay mix. If you can't find it at the local grocery, it's available at Grocerythai or at Importfood.
Posted by Smorg at 11:27 AM 3 comments:

Writing about opera and classical music all the time gets to be pretty tiring after a while, so occasionally I lapse onto other odd topics. One of the recent projects was to be an article about the pedestrian bridges of San Diego... Was, because I hadn't realized just how numerous pedestrian bridges are in this city!
When you google 'pedestrian bridge' and 'San Diego' you usually just keep running into a few well written about bridges: the canyon-spanning pedestrian bridges at Quince St, Spruce St, and Vermont Ave in Uptown area. And then there are a couple of recent news articles about the still-not-finished-yet new fancy suspension bridge linking Petco Park to San Diego Convention Center across Harbor Drive in downtown. A very knowledgeable fire-fighter friend of mine pointed me to a few more bridges, and a couple of hours spent on Google Earth poring over freeways and canyons found several more. In fact, I've identified so many pedestrian bridges now that I'm no longer very keen on writing about all of them.... Perhaps just the more interesting ones.
But, anyhow, in the midst of my bridge-hunting spree I found one via Google Earth where I didn't quite expect - at the eastern terminus of Clairemont Mesa Boulevard in Tierrasanta area. I thought I knew that road quite well, having kept an apartment right at a corner of that road and I-805 for nearly two years back in the mid 90's, and never knew about it. So when I spotted a 'dry' day in the middle of uncharacteristically rainy October, I hopped on the buses and the trolley up to Tierrasanta to check it out (of course I always check this sort of thing out in person before writing about it! If I retained any lesson from my medical career days, it is that I have absolutely no luck at all when it comes to getting away with bullshitting about stuff I don't know enough about. There are plenty of smarter people who would love to shine light on all the things I should have known about but hadn't taken the trouble to learn... in front of a group of very intellectually intimidating audience).
Tierrasanta is not well served by bus. There is no bus service on weekend, and only hourly ones on weekday. I left my pad in the eastern part of Chula Vista at 4:40AM and made it all the way up to Kearny Mesa Complex by 6AM (I was astounded! Would have expected a 2 hrs transit since I had to catch 2 buses and one train to get there). The first bus into Tierrasanta (holyland in Spanish?) didn't take off until 7AM, though, so I raided the McDonald's nearby for breakfast. It is a very impressive McDonald's... It even has a library area with leather couches and shelves of books and magazines you can read while waiting for your bus! (Thinking further about it, maybe that doesn't reflect quite well on bus service here that the restaurant is practically counting on you having to wait such a long time for your bus that you'd have time to peruse its library.

Most of the drivers are really nice and efficient, though. We just don't have enough buses!) 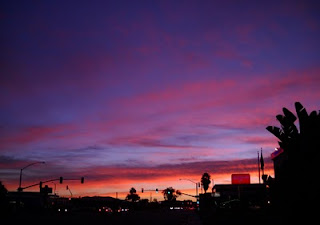 I was hoping for a few good shots of dawn over the wild mountain at the east end of Clairemont Mesa Blvd, but by seven o'clock the sun was already well past dawning... Bus 25 veers south at La Cuenta, so I got off there and walked 1/4 mile or so uphill to the end of the road and was rewarded by a few good morning sun shots like this one: 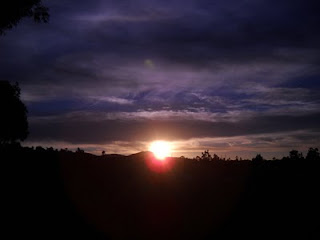 The bridge spans a canyon separating civilization from Mission Trails Regional Park. I headed across, looked around and just kept on walking... I hadn't been up on this side of Mission Gorge before, so why not explore a bit.
The main trail was quite wide and well-maintained. I soon spotted a little cut-off trail that heads east toward S. Fortuna Mtn, though. It looked invitingly off-the-beaten-path, so I veered off onto it. Went down a gully, across a little wooden bridge, and up a steep little hill with rough steps marked by logs and sand bags. You know... I'm still just young enough to remember the painfree agile days when I would have had a blast storming up and down these. Nowadays they serve as good reminders of the reason why I need my third leg. 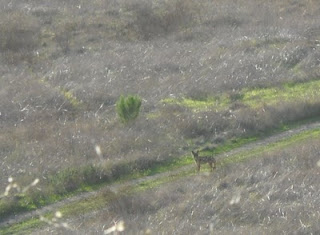 A few forks up the trail with the sun racing up the aging morning and I was up on top of a ledge checking my water supply and having a good look around (while stalling for breath). Something moved in the valley below... I had a look and thought it was one of those cute deers looking to nervously cross the trail in search of greener pasture. That was when the thing broke into a very canine-like jog. It wasn't a hoofer at all, but one of Mission Trails' resident cayotes. I wish he had ran my way to say hello, but cayotes aren't very well-liked in this town (they have a bad habit of having neighborhood pets for lunch, dinner, and even snack).
I took off on a trail toward the Fortuna Saddle (Fortuna is a long mountain with two summits on either end of a saddle)... and then must have taken a wrong turn somewhere (they don't always put direction signs on trail junctions here) as, an hour later I found myself on the 'Rim Trail' instead, heading north parallel to the mountain instead of toward it. Said a few not very holy words since by then much of the sole of my shoes had been de-grooved from climbing up the rough loose-pebbles trail surface. My water is more than half gone and it was getting sunny and hot.... And I hadn't spotted even a hawk!
But then I remembered that I hadn't set out to hike any mountain at all... I was only going to check out a pedestrian bridge, and that was done a long time ago. And so, having talked myself into not beating myself up over having gotten on a trail to nowhere, I had some fun looking around and taking another round-about trail back. There's some good views to be had on the Rim Trail, too. One of these days I might persuade myself up the mountain again and actually getting to one of the summits...  But for now, here is a slide-show/video summary of the hike, pretty much:
I gather this place would look even more inviting in the spring months when the flowers are blooming... If you like the music, it is the finale from Richard Strauss' Der Rosenkavalier from a 2004 performance at Zurich Opera. Franz Welser-Möst conducts the Zurich Opera Orchestra. Nina Stemme (Die Marschallin), Vesselina Kasarova (Octavian), and Malin Hartelius (Sophie) did the singing. A great DVD of the show is commercially available!
Posted by Smorg at 4:49 PM No comments: