What you see when you walk with your head down...

You encounter many aspects of reality walking along the sidewalks of San Diego, California.

Sometimes you don't have to do a double take to have double vision... 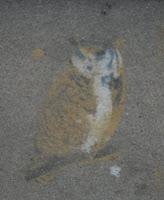 It's always a hoot looking down on elusive birds passing under your steps,
Though not so much walking over the remnant of someone's late night romp... 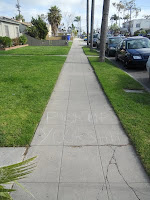 A few of my favorite people are celebrating their birthday today:

Imini emandi kuwe to the perpetually humane against all odds Nelson Mandela, Happy Birthday to Sir Nick Faldo (whose super-fluid golf swing I tried in vain to copy when I was younger), and Viel Glück zum Geburtstag to Prof. Hartmut Michel (the wizard of membrane proteins crystallization) and to the always artistically refreshing Bulgarian mezzo-soprano Vesselina Kasarova!
Posted by Smorg at 1:51 PM 4 comments:

Here in the USA talks of classical singing usually center around opera or oratorios, but there is another type of classical vocal music that is more intimate than either without being any less profound and timeless. Art song, the short musical setting of poetic lyric for a voice and a musical instrument (usually the piano) that has a knack for capturing its native flavors in understated elegance, is a rewarding labor of love for its performer and audience alike, inducing as much nostalgia as it does remembrance and even hope for the future. One of the best advocates for art songs and classical vocal music today, Hélène Lindqvist, the Swedish-Egyptian soprano and co-founder of The Art Song Project, generously indulged me with a cyber-interview a few days ago:
Smorg: How did you get interested in performing classical music? Was there any single life-changing moment that suddenly convinced you to become a classical singer?
Hélène Lindqvist: There actually was something like a changing moment when I got introduced to classical music. I didn't fit in well in the school where I started as a kid, so to get me out of there my mother let me audition to an "elite" music school in Stockholm. Suddenly I was 10 and into classical music. It was great.

Smorg: Sweden seems to have a particularly strong classical singing tradition! There are so many wonderful classical/opera singers who came from Sweden. Is opera (and classical singing) very much in the mainstream of entertainment there?

HL: In Sweden, people like to sing- on big parties and for holidays there are songs everybody knows. Many drinking songs. In the summer, they organize big outdoor sing-along concerts, which are also covered on the TV. These shows have the highest ratings every week. I think, it's because people sing much in general that many classical singers come from Sweden. The "classic scene" is not big.
Smorg: Aside from the vast repertoire of art songs you also sing roles like Constanze (in Mozart's Die Entführung aus dem Serail), Violetta (in La Traviata), etc. Is it a big adjustment to go from singing in staged opera to giving intimate Lieder recitals, back and forth? What do you do differently? Do you enjoy one more than the other?

HL: I love singing opera! I like it because I can use my whole body and being to express what needs to be expressed. The singing is then only a part of the package.I will have to keep the voice loud enough and clear enough for people to get the overall message. Opera is also very much a group effort, where I as an individual singer don't have much influence over many things such as: costume, lighting, wigs, staging, most of the time even, musical tempo and style is on this list as well. As an opera singer you will have to fit into the creation of the director and conductor. It's great if you agree with their visions and difficult when you don't.


In art song I'm the boss. I have to agree with the pianist, of course, but working with one that you trust, this is easy. Musically it's very often much more satisfying to not have to compromise your own vision in any way. When I record art songs, I like to envision the listener sitting in front of me in her living room in a nice chair and listening to me singing right there in front of her. That's how I like to listen to art songs as well. It turns into almost a one-on-one experience, that a bigger concert or opera can not provide.

Smorg: You include a lot of Swedish art songs and songs from relatively unknown composers on The Art Song Project website. What attract you to them?
HL: I grew up with the Swedish songs. As I started taking vocal coaching at the age of 16, this was very much the material that came first for me. Its sooooo dear to me, it lets you feel the forests and fjords and the feel of the country's "heart" immediately.
Smorg: How is it like working with Philipp Vogler in recitals and with The Art Song Project?
HL: Working with Philipp is great! We were colleagues at the opera house in Saarbrücken, Germany, and were musical partners a few years before we got together personally an then eventually married in 2000. We have played  a great deal of music together since!


We always liked going to libraries and obscure old bookshops to find sheet music of songs we never heard before. In most cases, you get them very cheap, as nobody knows what the heck it is. If you keep an eye open, you can find stuff at garage sales and in the "cheap-giveaway box" outside sheet music stores etc. We would then get to the piano at night, possibly with a glass of wine, to sight-read the new pile of stuff and delight in all the new stuff. We have been doing this for years and years, and last December we had the idea to actually share our finds on the net, so that other people could delight as well, without  doing all the work themselves. At the end of march this year, we were ready to start!
Smorg: What makes the project worthwhile to you?
HL: It's worthwhile in so many ways. I can share music that I have found and grown to love, I spend fun time with my husband, I can explore and refine my art in a way that gives me great freedom- AND I have had so many mails from people saying they enjoy our stuff, which is extremely rewarding.
Smorg: What makes a performance successful for you personally? (when you did everything you wanted to do with it regardless of how it is received? or if it is well received even if you didn't do everything perfectly? something else?)
HL: This is a difficult question! :) Some is about the chemistry in the room... When I perform within the parameters I've set up for myself; I'm happy...Smorg: Any plan on a recital tour or opera performance in the United States in the future? :oD
HL: I'd love to perform in the US, but have no plan as for now... (Find someone to invite me! :)

What Would You Do on ABC

Ranting is tiring work and addictive work. It's so easy to rant about things you aren't content with while forgetting to balance it with noticing the good things in life. With the news being so dominated by coverage of misbehavior it is too easy to start expecting the worst of your normal-looking neighbors. So I've been making it a point to catch the ABC news show 'What Would You Do?' every Friday night.

Much of the time real people really do the right thing when presented with the chance.Of course, sometimes they don't, and the fact that that is shown as well in this show is why I'm a loyal watcher.
Posted by Smorg at 12:08 AM 3 comments: