Roommie and I had a movie night last night to celebrate his return from a visit to the (extremely) rainy Midwest. The main feature for the evening was... The Fifth Element. It, of course, features a rather famous solo aria/fight sequence scene with a rather cool mix of a hardcore bel canto aria and techno dance music.


The first part of the solo (until 3:14 into the clip) is the 'Il dolce suono' bit from the very famous Mad Scene from Donizetti's Lucia di Lammermoor. Albanian soprano Inva Mula Tchako provides the voice for the diva. Here she is, in person.

Does her voice sound different live versus in the Fifth Element clip? Sound editing (in this case, especially reverb-ing) can be a marvelous thing when done right! Don't get me wrong, I'm not even close to knocking her. I rather quite enjoy the Diva Plavalaguna mad scene/music mix... It goes really awesomely with the fight sequence it shares the scene with (tho I'm not quite sold on how fragile the aliens that Leeloo knocks out are).

Anyhow, it's like listening to Queen's heavily process/synthesized music (and, if you must know, Queen is like my all time favorite rock band. Freddie forever!). It's amazing what they cook up in the stereo... Of course, if you had ever gone to any Queen concert, it never sounds the same live. They use so many sound effects to create the vintage Queen sound that it is just not possible to replicate in live setting.

Of course, sound mixing/editing has come a long way since the days of Queen (when all the effects were actually done and recorded rather than digitally manipulated post-recording). There are music snobs who would poo-poo such a thing, but I think there definitely is a place for this. It's like a specialized art form that allows you to experience what the artists hear in their head that they can't do naturally. As far as I'm concerned, getting good glimpses of Freddie Mercury or Brian May or Eric Serra (the composer that created the Fifth Element mix)'s fantasies is a treat!

The trick is to recognize what you hear and admire it for what it is... and what it isn't. The Diva Plavalaguna scene is a cool and memorable (if weird) bit of faux opera enhancement of a weird movie (that obviously did something right to attain its cult following status). It's too bad nobody can sing/sound like that in real life... Though if you go to the opera house near you and get a ticket when they put on a bel canto show (you know, stuff by Rossini, Bellini or Donizetti), you can get yourselves quite amazed by what real life opera singers can do with their voice live... without even the use of microphone, all while acting. I mean... have you listened to Lucia's whole mad scene where the first part of the Fifth Element scene comes from?


Isn't it mad how someone could sing like that over a live orchestra with no sound enhancement at all?
Posted by Smorg at 11:34 AM 1 comment:

Guest review courtesy of Mr John Carnegie, submitted promptly and all the delay is down to yours truly's tardiness in reformatting and minor editing stuff. Thank you, John!

The week beginning Sunday 19th April was due to be one of the busiest in Vesselina Kasarova’s schedule this year: two performances of Mahler’s Das Lied von der Erde given between her first two performances as Judit in Bartók’s one act opera Duke Bluebeard’s Castle. I managed to contrive that I had to be nearby in Germany during the week and had booked for the opening performance of the Bartók and the second of the Mahler ones. However, VK cancelled both of her Mahler performances –ostensibly through illness. So I’m afraid  that I am only able to report on her performance in the Bartók.

If she had taken part in the concert in the Beethoven-Saal in Stuttgart’s Leiderhalle, she would have experienced an excellent fellow soloist (Stephen Gould – the first tenor I have encountered who has managed to ride over the orchestra in the notoriously taxing first song), a meticulous conductor (Gabriel Feltz – whose concern for incisive detail was perhaps at the expense of the broader flow of the piece as a whole) and a superb orchestra (the Stuttgarter Philharmoniker – who were at home with this music in a way they weren’t quite in the Mozart symphony that constituted the first half of the programme). On the other hand, VK would  have found an unfocussed and inattentive audience – unsettled perhaps by the curious architecture of the Beethoven-Saal in which there is not a single instance of symmetry. 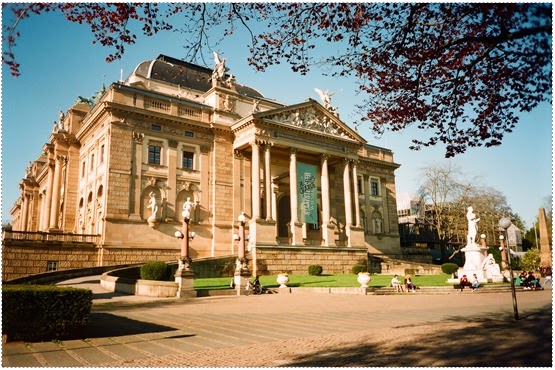 As the full orchestra was not required for the Mozart, I found myself sitting next to one of the violin sections as I opened my programme to discover that Janina Baechle was to substitute for VK. Upon hearing my exclamation of disappointment at reading this announcement, the violinist assured me that Fraulein Baechle was by no means an inferior substitute – which indeed turned out to be the case. However, given VK’s evident vocal health in Wiesbaden on the previous Sunday, I was curious to learn from the violinist that Fraulein Baechle was already in place the very next morning for  rehearsals for the first of the Mahler  performances in Aschaffenburg on Tuesday.

Anyway, on a happier note, on to the Bartók. The Hessisches Staatstheater inWiesbaden is like a smaller version of the Zűrich Opernhaus at which VK had (until recently) been such a fixture, she must have felt very comfortable performing there. However, given that Duke Bluebeard’s Castle is one of my favourite operas and that some of VK’s recent performances (such as the patchy recital in Amsterdam and her somewhat underwhelming CD rendition of La mort de Cléopâtre) have been less than perfect, I admit that I arrived at the Staatstheater prepared to be disappointed. I need not have worried. For her, the evening was a triumph on the level of her superb Romeo opposite Anna  Netrebko in Munich or her assured contribution to that delightful recent China meets Europe CD.

However, despite a nearly full and buzzingly expectant audience, the evening did not start auspiciously. The first half of the double bill was a performance of Poulenc’s LaVoix Humaine. It starred (and I use the word advisedly) Julia Migenes as the solitary female who is the only onstage character in this rarely performed piece based on the Jean Cocteau monodrama. Ms Migenes’s previous fame had been the principal focus of the publicity campaign to sell the double bill and she was being feted the following evening with a gala performance at the local art house cinema of the film of Carmen in which she appeared opposite Domingo. However, on the evidence of the Poulenc, she is now very much a faded star. She still has manifest stage presence but played the protagonist on an unvaried note of petulance throughout and she under-projected much of the text. 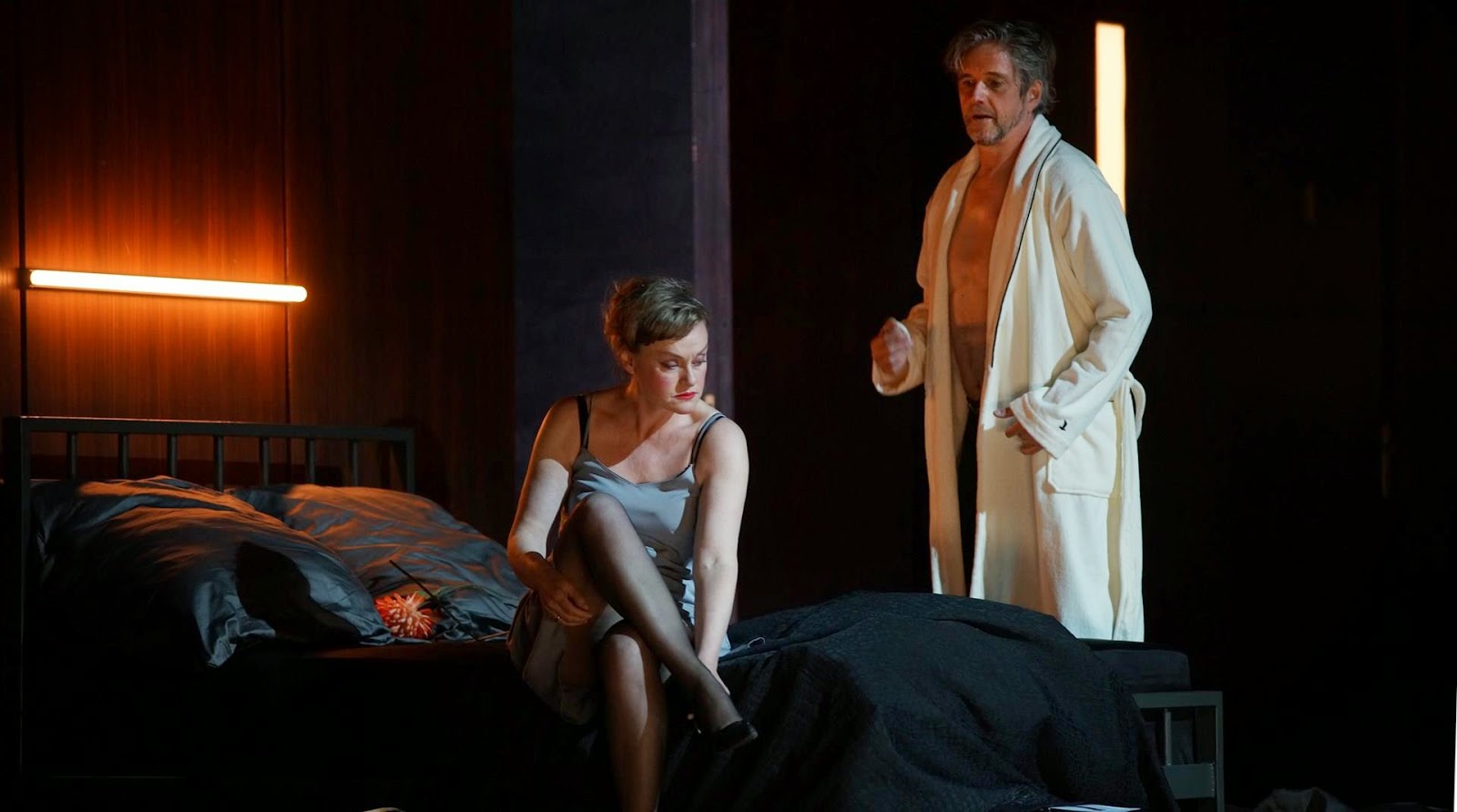 After this,  the Bartók came as a great relief.  Granted the (very good) Hessisches Staatsorchester is much smaller than the vast forces specified by the composer but a bigger band might have overwhelmed the theatre’s acoustics. As it was, there wasn’t enough room for them all in the pit and the harps had to take their places in a box –giving their part on unexpected prominence. The production turned out to be one of the best of the many versions of the opera I have seen. Uwe Eric Laufenberg (who is also the theatre’s Intendant) was clearly influenced (how could he not be?) by the opera’s close parallels with the currently trendy Fifty Shades of Grey.  Bluebeard’s castle becomes his top floor penthouse accessed by lift. VK’s Judit enters into it with an Anastasia Steele-like fascinated faux innocence. The opening of the first door (to Bluebeard’s torture chamber) becomes the opening of his laptop to reveal the hidden images there. At the end, in a dubiously distinct departure from Bartók’s reinvention of the original legend, Bluebeard’s former wives are ghosts rather than still living and Bluebeard stabs Judit to death before she herself becomes a ghost.

The Staatstheater’s Music Director Zsolt Hamar was on conducting duties that evening and a very precise and inspiring job he made of it. As Bluebeard, Gerd Grochowski (who will play Wagner’s Dutchman at Wiesbaden next season) proved to be a most acceptable substitute for the previously announced Johannes Martin Kränzle. Subdued at first (and quite rightly so in terms of both production and opera), he developed stature from the opening of the fifth door onwards into the reluctant dominance required by the text. 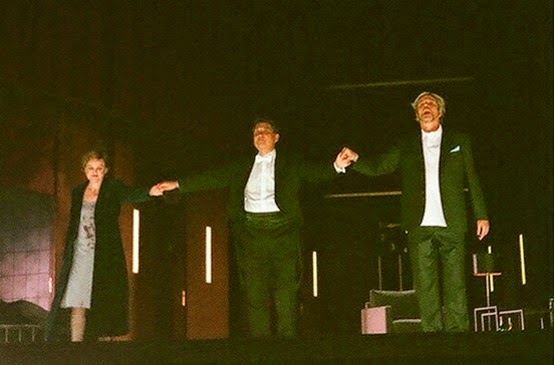 However, the emotional and artistic centre of the performance was VK’s Judit. Looking much younger than her years, she succeeded in capturing all the facets of Judit’s complex character from wide-eyed fascination to shocked acceptance of the horrendous bargain she has made. Vocally, there was scarcely a trace of the all too audible inbreathing problems she had been displaying of late and she easily managedto impose herself over even the most extreme moments of orchestration. Of particular note was her subtly stunned realisation on the opening of fourth door (the garden of flowers) of a sense of utter hopelessness. This was the pivotal moment in what was arichly satisfying portrayal. 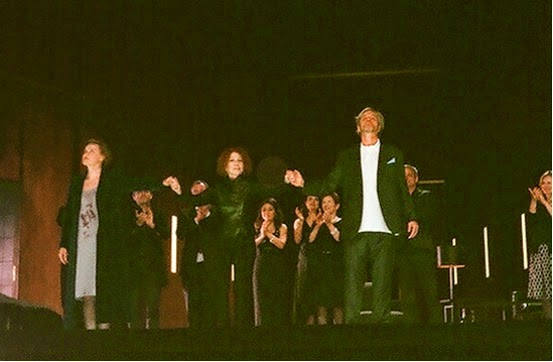 At the end of the performance, it was audibly clear that  –  despite Ms Migenes’s somewhat presumptively grandstanding re-entry into the centre of the curtain call line-up – it was VK who got by far the biggest ovation during the solo calls. 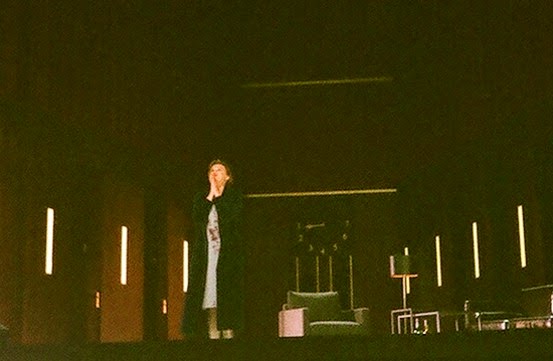 All in all then, a marvellous evening for VK and she was visibly delighted by the result. She is due to perform in appear in three out of the four performances of the production in Wiesbaden in June.  Provided that she turns up, anybody who can make it along will be richly rewarded.
Posted by Smorg at 9:42 AM 1 comment: