Guest Announcement: The Fight for the San Diego Opera Continues

Update: 30 Apr 2014: The SDO associates came through! The Campbells are out and the company won't be closing. Now it is safe for opera supporters to donate to help save the San Diego Opera. Please donate whatever you can. The money will be kept in an escrow account until the $1million necessary to save the 50th season is met (if not met, it will be returned).
---------------------------------------------
San Diego Opera Names Carol Lazier as Acting Board President
Board President Karen Cohn Resigns With 12 other Board Members
Company Closure date has been Deferred to May 19, 2014
During this time Company Will Solicit Donors to Fund Budget Proposed By Opera America
Meeting of the Members of the San Diego Opera Association to be Announced Shortly
SAN DIEGO – San Diego Opera announces Carol Lazier, the former Secretary of the Board, is now the acting President after President Karen Cohn resigned along with 12 other Directors in a board meeting that lasted over four hours.
At a duly convened meeting on April 17, 2014, by vote of the Directors constituting a majority of the required quorum for such meeting, the San Diego Opera Association deferred its previously announced April 29th date for closure of operations to at least May 19, 2014 to permit the reconstituted Board and the Special Committee led by Carol Lazier to explore opportunities to continue the Opera Association's mission.  A copy of the Resolution is attached.
Carol Lazier recently offered $1M to help the Company and Board members research and define ways to redirect the Company with new fundraising models, a new repertoire and production techniques, and new cost saving measures.
“We have a devoted staff, an energized Association and a board newly focused on finding novel and fiscally responsible ways to present great opera to the City of San Diego.  I have been deeply encouraged by the outpouring of public support, and the genuine and enthusiastic participation by the San Diego Symphony, Opera America, and the opera world.  Together we can recreate San Diego Opera’s future.”
The Company, under her leadership, will now explore donor and fundraising options to prepare a 2015 season, the Company’s 50th, with advice from Opera America and outside experts.
A meeting of the Opera Association Members is being planned and details of that meeting will be announced shortly.
The Company, led by Ian Campbell, announced its closure last month which was originally scheduled to occur on April 14, 2014 after its final sold-out performance of Don Quixote. A vote by the board on March 31 delayed that closure by two-weeks until April 29, 2014. A vote yesterday extended this date to May 19, 2014.
Inquiries about the Resolution should be directed to Bruce S. Ross of Holland & Knight, bruce.ross@hklaw.com, 213 896-2400.
Inquiries for the press release should be directed to Edward Wilensky at San Diego Opera, Edward.Wilensky@sdopera.com, 619-232-7636
www.sdopera.com
Posted by Smorg at 4:28 PM No comments:

My friend M and I went to San Diego Opera at the Civic Theater on Tuesday night to see a performance of Jules Massenet's Don Quichotte (Don Quixote), and were quite thrilled to see the place completely packed. There was hardly any seat left open even up on the balcony. 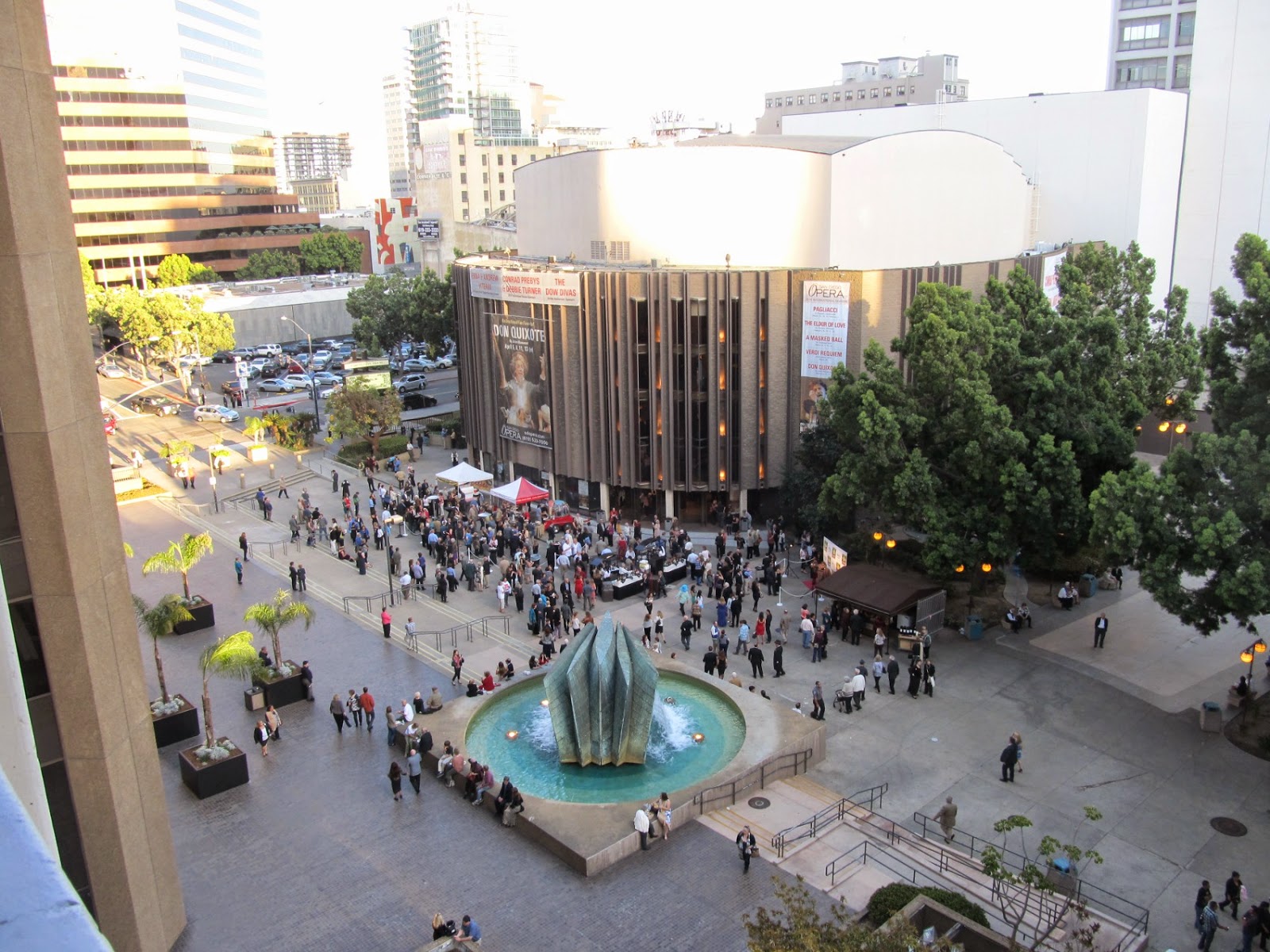 The staging is the same from the 2009 run and the title role is still spectacularly sung and acted by Italian basso Ferrucio Furlanetto, who brings just the sort of gravitas the character needs to draw sympathy rather than exasperation from the audience. If you can pick one artist to carry the show and make people want the opera company to survive the current abysmal mess that it is in, Furlanetto would be it. He is so at home with this role that he plays with it now rather than just coping.

Anke Vondung is quite a different Dulcinea than Denise Graves was in 2009. Not as much presence, perhaps, but quite fresher and more lyrical voice (at times a bit too 'lyrical' in the huge hall that is the Civic Theater, as she was easily overpowered by the orchestra). Eduardo Chama is a crowd pleaser as Sancho Panza and got the most (complimentary) whistles at the curtain call for keeping the show fun even to its tragic ending. I should say... I don't know why Simeon Esper is still singing a minor role like Juan. The dude has got a gorgeous voice (and quite a good look to boot)!

The chorus was a bit out of sync at the start but gelled up nicely thereafter. 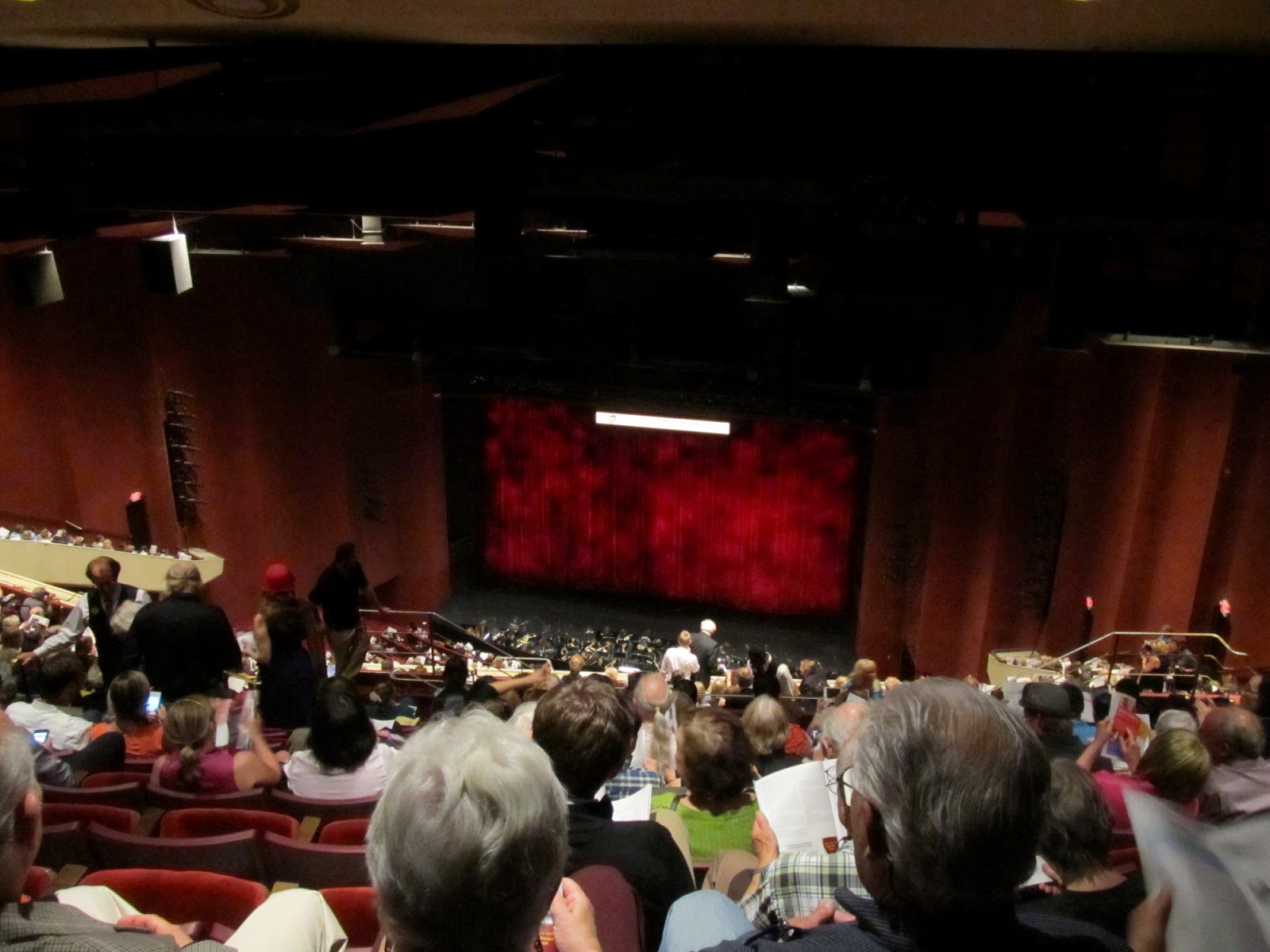 I'm afraid I'm being a bit boring writing this up... It wasn't a care-free night at the opera like it used to be. People were taking photos and videos before and after the curtain and making jokes about how this could be the last opera they'd get to attend here in "America's Finest City"... and I got a bit depressed and also a bit conflicted about it. I'd like the opera to survive, of course, and for the many people I admire in the organization to get to keep their job. At the same time, I wouldn't like for it to survive with Ian and Ann Campbells heading it (and a real opera board shake up would be nice, too, starting with Karen Cohn, whose histrionics in print has really poisoned the pool of anyone that cares even a little bit about the San Diego Opera).

Mr Campbell had done a lot for the company, but his vision for it hasn't been jiving with what the popular audience wants for some time now. It's odd to read how him and Ms Cohn keep saying that 'grand opera' is the what people here wants, and yet at the same time they are both claiming that the chief reason for their attempt to shut down operation is 'declining audience attendance'. First off, the only works that could be confused with a 'grand opera' the SDO has staged since 2006 are Bizet's Carmen and Verdi' Aida. So, I suspect that when they say 'grand opera' here, what they really mean is ultra-traditional staging of staple opera as if they are museum pieces rather than living arts.

I know that I, for one, haven't been going to the opera much the last couple of years because the 'traditional staging all the time' thingy got pretty stuffy for me. The most entertaining show I had gone to there in recent years was Strauss' Salome... and that was due to the minimalist clutter-free staging as much as the stellar performance of the cast. And I was always dreaming of getting to, one day, see a low-coast minimalist conceptual Regietheater production like they do in Central Europe that makes people think about the story being told from the stage. A story that they can relate to despite of the opera's original setting. But there was no hope of that ever happening here while the likes of Mr Campbell and Ms Cohn are in charge. They want their 'grand opera' (bad use of the term notwithstanding) and they fault the audience for not liking their taste enough to pay to come to performances. For all they have done for the opera, the sudden manipulation of the opera board to force a shut down just because they couldn't make it work to their liking is selfish beyond belief, especially considering all the hard working loyal company staff and associated musicians who will soon be out of a job if the rest of the opera board can't come up with a way of saving the company.

And so, their dark cloud hang over the opera house and weighed down even Tuesday's good performance of Don Quixote... which I'll cite as the excuse for my lackluster not-much-of-a-review 'review'.. with apologies to the artists, who showed way more spunk than I do even though they are even more affected by this whole stinky thing!
Posted by Smorg at 11:17 AM No comments: