It's so hot out I'm feeling like being stormed by a trio of beautiful(ly talented) virtuoso violinists!

A hot day sucks, but not so much when you turn the heat way up with a pack of musically gleeful women like... these:

Gears4Growth in San Diego: Giving Wheels Where They're Needed

Hey San Diegans! Do you still remember the rush you got from your first bicycle ride? Want to pass that wonderful feeling along to others who can't afford to buy a bike? Come out to join Gears4Growth Poker Bike Ride at 11AM on Sunday August 25th at Plaza de Panama in Balboa Park (it's the big square in Balboa Park between Museum of Arts, the House of Hospitality and Mingei Museum) and help support this program. It'll be an easy and friendly neighborhood ride for fun and for a good cause!

They are a non-profit organization that collects donated bikes, fixes them up and the gives them to the International Rescue Committee benefiting new refugees from war-torn countries settling in America and in need of transportation to enable their growth and enrich their lives. Visit Gears4Growth for more info on how you can help.
Posted by Smorg at 5:35 PM No comments:

Email ThisBlogThis!Share to TwitterShare to FacebookShare to Pinterest
Labels: Around town, bicycling

Teach 'em how to fish; or donate to Messy Jessie's Bicycle Academy (and let her do the teaching)

Feel like doing something nice to help San Diego's under-privileged kids? Jessica Stephens of Messy Jessie's is trying to start up a Bicycle Academy to educate youths on how to repair bicycles and to provide bikes to those in need.

Jessica has been working in the bicycle industry for the past fifteen years and currently runs a bicycle stand at the local farmers markets, along with teaching basic maintenance classes at local bike shops and make jewelry out of the worn bike parts. The lass knows her craft and is willing to pass it along to make life better for others. This sure is a cause worth joining.


Please visit her website; http://www.indiegogo.com/projects/messy-jessie-s-bicycle-academy , and help if you can!
Posted by Smorg at 4:39 PM 2 comments:

Feel like going out for a casual bicycle ride in San Diego but don't want to tango with cars? Come out to the CicloSDias, San Diego's version of the Ciclovia next Sunday in South Park. This is a family-friendly low-speed 5 miles ride on closed-to-cars route from Logan Heights (30th & K) to City Heights (Cherokee Point Elementary School) by way of Golden Hill, South Park & North Park.

You can bike or walk or skate part of or the whole length of the car-free route with friends new and old from 10am - 4pm, at a speed that allows you to see and enjoy the neighborhoods. It's safe and it's a lot of fun! 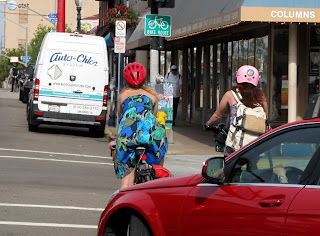 A lot of people would like to go out riding their bike more, but don't feel safe riding the streets of San Diego without 'proper bicycle structures' like bike lanes or cycle-paths. Well, what better way to convince city officials to put in the necessary structures than to turn up in great number at car-free events like the CicloSDias and show them that better bike-friendly streets is what a whole lot of tax-payers want? The more cyclists there are riding around, the more the city is likely to do something to protect cyclists and the more aware drivers will become of bikes on the streets. You don't even have to donate any money. Just show up and have fun!
Posted by Smorg at 9:20 AM 1 comment:

Living next door to a singing coach with no star pupil really makes one appreciate the rarity of great singers better! One voice student in particular, a tenor who sings mostly Broadway tunes, has been taking lesson two to three times a week ever since I moved here last September and has not gotten even a little bit better. Is that some sort of an indictment against the teacher?

But then I shouldn't be too hard on the voice coach neighbor... after all, I can often flee from my pad and go ride my bike around the neighborhood (or to one of the libraries nearby) while he is stuck in close quarter with that out-of-tune drone singing for a full hour every visit. What torture we all must endure sometimes to make a living!

On a more cheery note, though, our weather has been unseasonably cool for the last week and a half, and that made for some really good bicycling trips around town.


Alas, summer is warming up again, though, so I'll be stuck riding close to the ocean for a while. 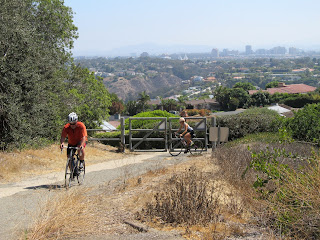 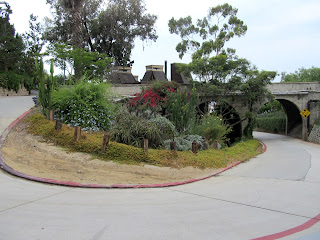 Luckily, there's Mt Soledad, this little hill a few miles to the north, that has lots of cool little roads to explore and is so close to the shore that the heat isn't a problem there much of the time. 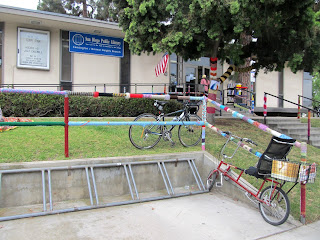 Side note: what's with all this knitting thingy that's being wrapped around structures and trees around town of late? It's rather cute... though a bit wasteful (but then wastefulness in art isn't such a crime, I imagine).
Posted by Smorg at 2:00 PM 3 comments: