SDSU Opera Theatre Presents A Grand Night!, a Celebration of Opera, Operetta and the Golden Age of Musical Theatre

Tickets for A Grand Night! are $18 general admission and $12 for students and seniors (60+).  An optional $50 Grand Guest ticket for the Sat. Nov. 16, 7:30 p.m. performance includes a pre-performance champagne reception in the rose garden, a tantalizing silent auction, exclusive reserved seating and complimentary parking.  A portion of each Grand Guest ticket goes to support future SDSU Opera Theatre programming.

Tickets can be purchased through the online box office or at the box office window one hour before performance.  More information, a map and downloadable directions and parking options can be found on the SDSU School of Music and Dance website at musicdance.sdsu.edu.
A Grand Night! is conceived by SDSU Faculty members Enrique Toral, Stage Director, and Michiko Lohorn, Music Director.

Enrique Toral has won acclaim across North America and Europe for the beauty and incisiveness of his singing and for his dynamic stage portrayals. He has appeared on Broadway and with the New York City Opera, Glimmerglass Opera, Cincinnati Opera, San Diego Opera, New Orleans Opera, Opera Carolina, New Jersey State Opera, Connecticut Grand Opera, Opera Tampa, Sarasota Opera, El Paso Opera and with the Music Festivals at Ravinia and Tanglewood. A passionate voice teacher, dramatic coach and stage director, Toral has served on the voice faculty at the SDSU School of Music and Dance since 2006 and served on voice faculty of the MFA program in the SDSU School of Theatre, Television and Film from 2008 to 2012.  As of fall of 2013 he is the new Stage Director for SDSU’s Opera Theatre.

Michiko Lohorn is an active San Diego musician trained as a pianist, vocal coach, choral conductor and musical director.  A graduate of San Diego State University, she works in the School of Music and Dance as musical director of the opera workshop and vocal coach.  Lohorn also serves as organist at First United Methodist Church of Chula Vista.  Her work experiences include elementary school choral instruction, San Diego Opera Education and Outreach, musical theatre productions, and many years of local coaching and performance.

Still to come in the season is the brand new SDSU Showcase Concerts on Sat. Dec. 7, 2013 from 1:00 p.m. to 4:00 p.m.  Patrons will enjoy a music-festival style afternoon, filled with a captivating array of music and dance mini-concerts, interspersed by light bite receptions.  Patrons will self-select the mini concerts of their choice from a menu of delightful offerings including Orchestra, Wind Symphony, Dance, Jazz, Opera, Choir, and Mariachi and Band, then mingle with friends and other music lovers to savor a nibble during short interludes between concerts.  One-price tickets are $25 general admission, and $10 for children 12 and under.

For up-to-the-minute news and information about all of the recitals and performances SDSU School of Music and Dance, visit the School’s calendar or connect on Facebook or Twitter.

The study of music was an early area of concentration at San Diego State University.  Among the first seven professors hired in 1898 when the university was chartered, was a music professor.  By 1907 the Department of Music at San Diego State University began conferring degrees, and a commitment to excellence in artistic innovation was dedicated.  This commitment fostered a long legacy of educational and musical leadership for the program.  Today it flourishes as the SDSU School of Music and Dance.  For more information visit musicdance.sdsu.edu.
Posted by Smorg at 5:17 PM No comments:

I'm afraid I've been neglecting the blog a bit. I've been out of town for work since the first week of October and won't be back until Nov 3rd. So much going on that might get blogged about later. In the meanwhile, though, here is hoping everyone is having a good October! 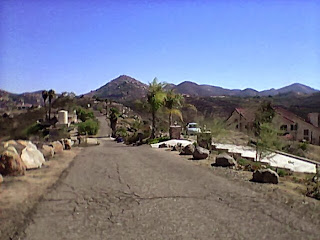 (PS: Here's another cool recent discovery for me, a gorgeous little back road from Poway to Hwy 67 without having to deal with cars!)
Posted by Smorg at 9:27 AM 2 comments: 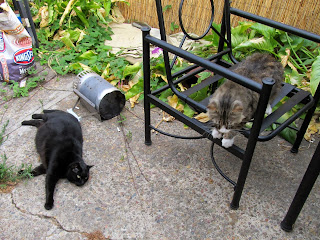 Casey (the black cat) and Theo still ambush me by my front door every morning. I swear I don't feed them (their owner does a good job of that himself, Casey is now so rounded she looks like a black furry basketball with big yellow eyes at night!), but I do find it hard to walk/bike off without first giving them a good petting session. Casey is good about letting me leave... after having dished out some returned petting of her own, that is (she likes to lick... and you know how cat tongues are!).

Theo is a more curious character... She is longer and more slender, and almost surreally elastic! You bend down to tickle her ears and the next thing you know she is completely wrapped around both of your ankles! I don't know how she keeps her sense of direction being nimbly twisted around like that, but she's coordinate enough to give you a good whack with her paw if you try to disentangle and sneak off... 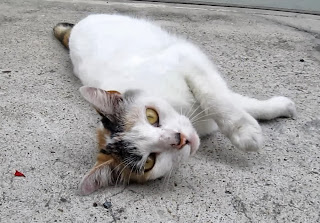 The relatively new feline addition to the neighborhood is Ally the alley cat. Apparently she was a house kitten until a few months ago when her owner moved away to a new pad that doesn't allow cat, so he left a bag of dry cat food with a neighbor and just 'released her to the wild'. Ally isn't more than a year and a bit old, I think... A really street smart calico. It seems everybody feeds her, but she remains as thin as a stick (probably has worms). She usually turns up at the alley carport outside my window late in the afternoon and meows to see if I'm around and have a tin of cat food handy. 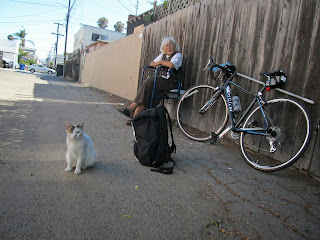 Nowadays she has also memorized the sound of my bike! I'd turn into the ally on my way home, and the next thing I know she'd jump out from one of the bushes and then walk all the way home with me to get her supper! Even my 'I don't like cats' 92 yrs old neighbor finds Ally amusing. 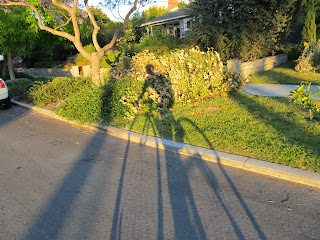 Anyhow, I've been riding around town a lot, of course. A lot of people like to pit 'commuter cyclists' against 'recreational cyclists'... Well, I do both! Luckily enough my part-time job is just 45 minutes ride away (well, 55 min on return trip due to hill climbs). And when I'm not working, there is still nothing quite like a good ride into the traffic-free San Diego countryside to sweat off the stress while enjoying fantastic change of scenery! 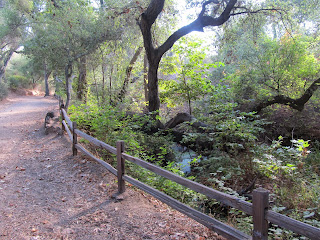 I'm not telling you where my favorite cycling hang outs are... I'm liking them remote! ;o) 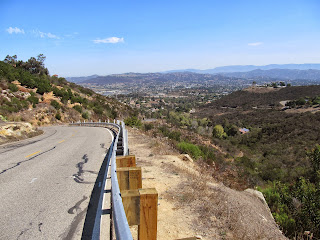 Can you believe the last two photos are just 30 minutes ride apart??? San Diego is a blessed corner of the earth!
Now, if only we can lure one Vesselina Kasarova or Lisa Batiashvili into town for a concert or two, life would really be perfect in America's Finest City!
Posted by Smorg at 9:20 PM 2 comments: