It's that time of year again! Wishing everyone a very Merry Christmas/Happy Holidays with a little help of Sulkhan Sintsadze. Stay safe and best of wishes for 2014, too!

PS: Lisa Batiashvili includes 5 Sintsadze miniatures on her Beethoven concerto CD. As you can hear, it's pretty enchanting!

Email ThisBlogThis!Share to TwitterShare to FacebookShare to Pinterest
Labels: festivities

Just a taste of Enzo as the rain returns in December

I discovered Enzo (), the mellow-voiced French singer, in the late 90's while in college. I was taking French classes then and found watching French movies and listening to French music very helpful in acquiring the ear for the language. Enzo was especially helpful... I mean, listen to her diction!


Or even if you aren't trying to train your ears to hear French words really well, the lass is still quite transfixing to listen to... even as she pretends to be just a lounge singer.
Posted by Smorg at 9:40 PM 4 comments:

I somehow managed to dodge the intermittent rain on my way to Jacobs Music Center (formerly Copley Symphony Hall) last Saturday evening. The San Diego Symphony was offering an early Romantic program of Brahms' Haydn Variations and Beethoven's 9th Symphony.
The young maestro Ken David Masur was the evening's no-nonsense conductor. I wasn't terribly familiar with Johannes Brahms Variations on a Theme of Joseph Haydn, Op. 56a, so it was quite a pleasant musical discovery. The piece only requires a small orchestra without the bigger brass and anchored by the woodwinds (a happy thing considering the SDSO's first rate winds section!). The lilting pastoral theme is followed by eight fantastically varied variations that allows all the instruments to shine. The end is capped by a virtuosic grand finale. It's an interesting piece... starting like a soft country field dance and ending like a grand symphony. It was a nice prelude to the evening's main attraction; Beethoven's biggest symphony.

Beethoven's immensely complex Beethoven's 9th Symphony was conducted without a score. Quite a feast for a young conductor! Maestro Masur set a brisk pace and a very clean reading of the much loved epic opus, trading a bit of sentiment for a fresh flair. I suspect the newer and/or younger audience enjoyed it a bit more than the older/more veteran ones. I liked much of it, though there were places where I would have liked a bit more time to process the mood that Schiller & Beethoven tried to describe. The fast pace also was a bit of a chore for the soloists to keep up, though everyone managed.

Baritone Richard Zeller clearly enjoyed his lines and they benefited handsomely from his voice. The star soloist of the evening had to be Robert Breault, though. I was quite amazed at how youthful he sounded and how supple his voice still is. He injected quite a bit of pitch-perfect bel canto and a whole lot of good nature pathos into his solo, and even managed to convince Maestro Masur and the orchestra to temper their tempo to avoid an acoustic train wreck.

I'm afraid I couldn't hear much of Elizabeth DeShong (but then I wasn't in a very acoustically favorable section of the house). Soprano Measha Brueggergosman proved quite eye-drawing (in a good way! She just sat in her seat with this exotic look and a Mona Lisa-ish smile on her face that was hard to look away from) even before she started any singing. When she did stand up and started sounding, though, her voice dominated the hall. The lass was loud... though quite uneven. This was the first time I heard her live and I quite liked the sweet middle part of her voice. Alas, Beethoven, when penning the soprano solo bit for this number, was more interested in the upper notes, and those from Brueggergosman were quite less sweet and at times downright shrieky (it didn't really help that she was much louder than everyone else whenever she was singing).

Another star of the evening was the impeccable San Diego Master Chorale. To be honest, this band is getting on my nerves a bit with their dependability. How are you supposed to criticize a chorus when they are always turning up on their A game??? The tenor section used to be the most vulnerable part of the choir, but they were just as spotlessly fantastic as the rest of the group were Saturday night.

All in all, the concert was a big success, and I think I wasn't the only audience member who was hoping for a Choral Fantasy as an encore when the show was over as we clapped the performers out for three rounds of curtain calls. (That's about as many as you're going to get here in San Diego. It's a strange town... We give easy standing O's, but we are also always in a hurry to get home and won't keep clapping for long).

PS: I didn't get rained on on the ride home either, but man, 5th Avenue can really use some repaving. It's no fun sprinting uphill on such a wavy pavement!
Posted by Smorg at 1:52 PM 4 comments:

I went riding in the mountains of Jamul the other day and was passing through the Sweetwater Bikeway on my way back to town when it dawned on me that the riverbed was looking cleaner than usual... Most of the shopping carts that had made themselves at home  in the river were gone! A big thank you to whoever got down and dirty (and probably quite wet) to drag them off to a more suitable shopping carts haven!

There always are a lot of things not going 'right', and it's always tempting to get pessimistic about stuff (which is probably why doom-selling is a perpetually profitable business). But there really is no knight in shining armor who is coming to rescue us out of whatever problem we have. The guys and gals that went and cleared up the river didn't just sit at home and pray or hope that someone will rid the riverbed of all those trash. They just went out and did the dirty work themselves.
And it isn't just grown ups who are doing cool things like this that benefits the whole community. The other day I ran into a bunch of kids at the summit of Mt Helix who were going around picking up trashes that some inconsiderate visitors had left behind. Despite of some sentiment that kids today aren't as responsible or proactive as previous generations, the trashes were most likely left by grown ups and were being cleaned up after by kids not old enough to even have a provisional driver's license yet. 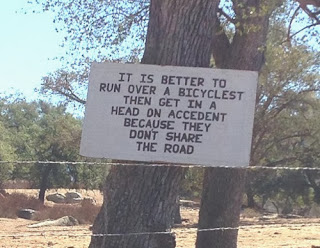 A month or so ago an anti-cyclists sign posted on a private property at Four Corners (the intersection of Lyons Valley Rd and Honey Springs Rd) in Jamul became news and drew a lot of outrage... from both cyclists and drivers who don't like cyclists. But most people aren't murderous maniacs even when behind the wheel of an automobile. Thanks to the many kind, reasonable and good neighborly locals who brought up the issue at their community meeting, the sign has been removed and I can report that just about all the cars and trucks that passed me on the area's narrow roads last Saturday were a pleasure to share the pavement with.
Aside from the many obvious signs that things have gotten much BETTER over the years rather than the other way around (people are not only living longer and healthier, they are also freer to voice complaints and discontent without getting shipped off to Siberia or some place worse), there are also more subtle signs of that all around, if only we would focus more on them and not just on the ills of the world. The world will never be free of ills and icky stuff, and we all will still do stupid things once in a while. I just think that life would only continue to be better if every time we start to slide into the find-things-to-get-outraged-and-complain-about mode, we break the cycle early and go out to find good and useful things to do and people who do good and useful things to praise instead. At least try that for a month... It's the holidays season after all.
Posted by Smorg at 9:51 AM 3 comments: