I blinked and another year just sneaked by! And what an eventful year it was, too. After three years at the same pad my roommate and I are looking for a new abode to move into (the landlady is selling the building), hopefully still somewhere in the Uptown area.

I would be quite sad to say good bye to all the neighbors' cats that have adopted me, though. Casey and Theo are quite a double act, and Ally the alleycat has gotten used to following me home from her end of the alley and getting some tasty cat food after I had put the bike in.

I'm afraid Bobo finally passed away this summer. She was 92 yrs old... and the alley hadn't been the same without her. Everyone still remember her (dirty) jokes, though... we couldn't help it. She told the same ones every time we ran into her!

I'm delighted that the San Diego Opera survived something of a death and transfiguration this year, of course, and the new opera season opens next week with Puccini's La Boheme! If you had never tried opera before, there isn't a more newbie-friendly opera than this most romantic piece that inspired Rent! 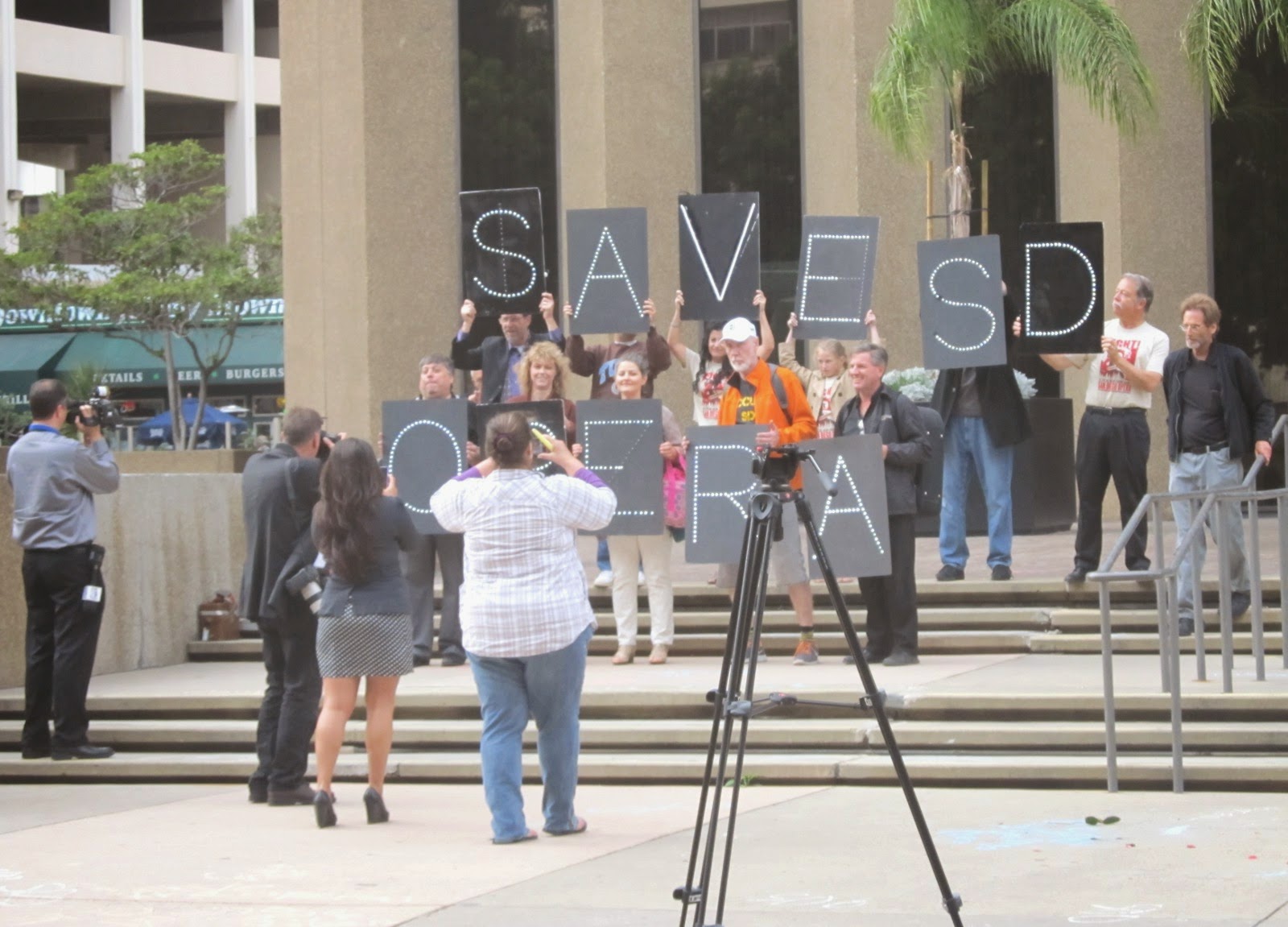 I also made a lot of amazing people on bicycle in 2014, many of whom had become good friends who somehow keep riding with me even after they had caught on to my weird tendency to stray up local (rather steep) hills... A few friends even steered me to cool unfamiliar patches of town and up some really gory roads that, before I started biking in 2012, I would have given me a heart attack just looking at them! Here's a bit of my 2014 year on the bike.


And to make it even sweeter, I can now say that I have finally had a year without a high speed downhill crash... Yey! I'm afraid a few of my friends had spent some time on the tarmac this year, though. Luckily everyone has recovered okay without lasting damage. Whew!

Thanks very much for stopping by. Here's my idea of a year end firework display...


This review of Frau Kasarova's November 25th concert at the Muziekgebouw in Amsterdam is courtesy of Mr John Carnegie. Thanks, John!


AT THE MUZIEKGEBOUW, AMSTERDAM

A couple of weeks previously, VK had made unscheduled appearances in Amsterdam substituting for Elina Garanca at the Concertgebouw. Now she was appearing in the city in her own right at the Concert Hall of the 21st Century at the Muziekgebouw in recital with Hansjörg Albrecht at the piano.

I had not been in Amsterdam for nearly three decades. So I decided to take the opportunity of combining the invitation to run theatre workshops there with the chance to catch VK in concert. I had often experienced her performing live in operas but this was the first time I had ever encountered her in a recital with piano.

The Muziekgebouw is a modern wooden-slat-lined concert hall with moveable walls designed to vary the capacity of the audience and the size of the stage. Such is the popularity of VK in Amsterdam that the walls were out to their maximum width and there was a near-capacity audience.

A pre-concert recital with two young artists near the beginning of their careers (an admirable tradition over here) revealed that the hall’s acoustics favour the piano over the voice. Fortunately, when it came to the main concert, Herr Albrecht was such a sensitive collaborator than he managed to maintain a reasonable balance for much of the time without VK having to strain to be heard over him.

The programme was in two parts. The first half consisted of Wagner’s Wesendonck Lieder. It did not start well. VK was visibly nervous and inadequately warmed-up. In the first song, Der Engel, her increasing evident vocal problem of an obtrusive in breath was worse than I had ever heard it and consonants were swallowed. Things considerably improved from Stehe still! Onwards but there were still problems – such as the occasional misjudging of pianissimo as inaudibility (and I was sitting in the front row so it would have been worse for those behind me). Still, although this Wagner set represented VK at the least effective I have ever heard her live, it was still overall a passable performance.

After the interval, an under whelming opening Villanelle from Berlioz’ Les nuits d’été seemed to presage a return to the vocal problems of the beginning of the recital. However, from the beginning of Sur les lagunes (the third song of the cycle), as if by magic everything suddenly clicked into gear and VK was firing on all cylinders to produce a consumate performance that continued through to the end. The sense of mounting satisfaction in the audience was self-evident. At the end, they exploded into a frenzy of applause and, from most, a standing ovation. (Mind you, a week of theatre and concerts in Amsterdam had accustomed me to the sad fact that the Dutch have caught the American disease of the automatic and indiscriminate standing ovation. However, here at least, it seemed genuine.)

(Video is not from this performance)

VK rewarded the audience with two electrifying Handel encores: Ombra mai fu and Verdi Prati – both delivered for the first time in this recital without a score in front of her. Such direct and consummate communication topped an evening that had an unpromising start but ended up as a triumph.
Posted by Smorg at 12:33 PM No comments:

Well, well, my Christmas season sure started on a good note this year. Look what I've got in my stereo already! 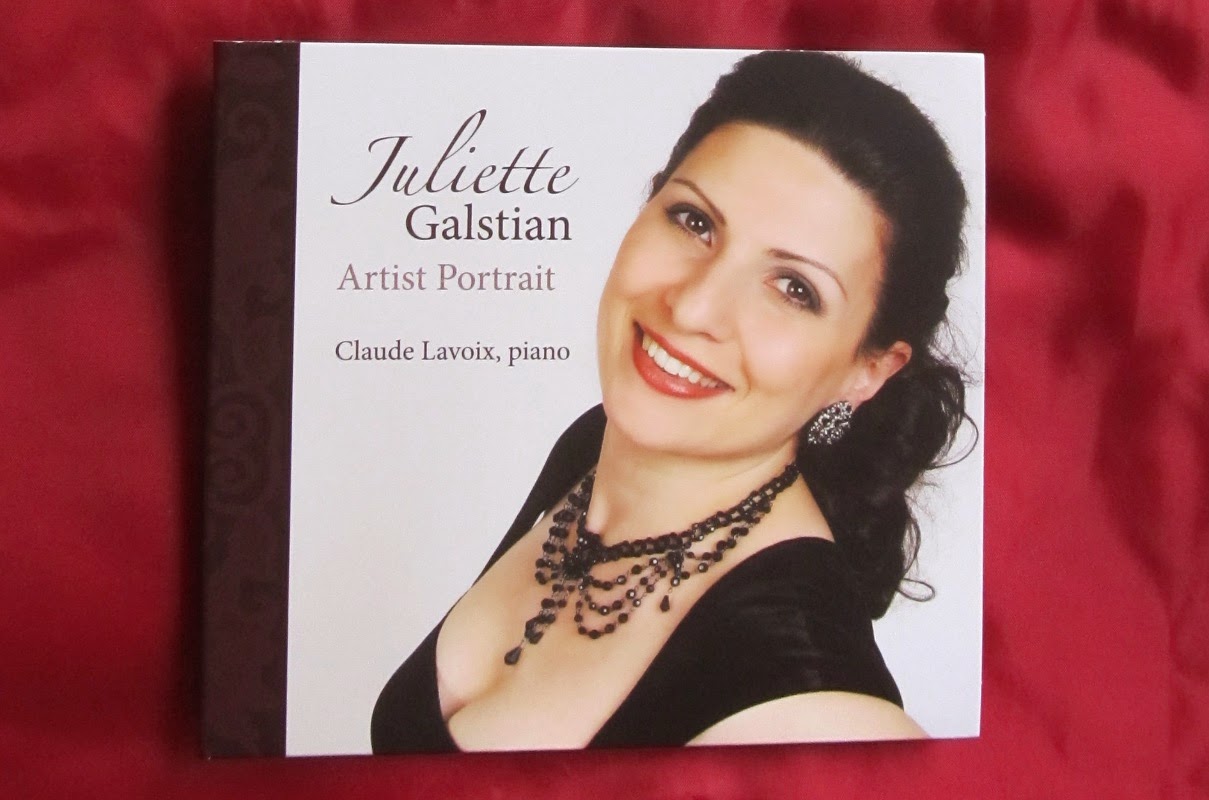 That's right, Juliette Galstian has released a a solo recital CD! Many opera fans will have known Juliette Galstian as the dark-voiced title character of Gluck's Iphigenie in Tauride and as Susanna in Paisiello's Nina (that features Cecilia Bartoli) DVDs from Zurich Opera. She was also a convincing Rinaldo at the same house a few years ago before seemingly fell off the face of the earth, or at least from the operatic stages.

I was tempted to report her a missing person since it ought to be a crime for someone that talented to go into hiding at the prime of her career. As it turns out, though, she has been having some fun with a proper teaching job at the Conservatoire de Geneve... and recording a lovely disc in her spare time. 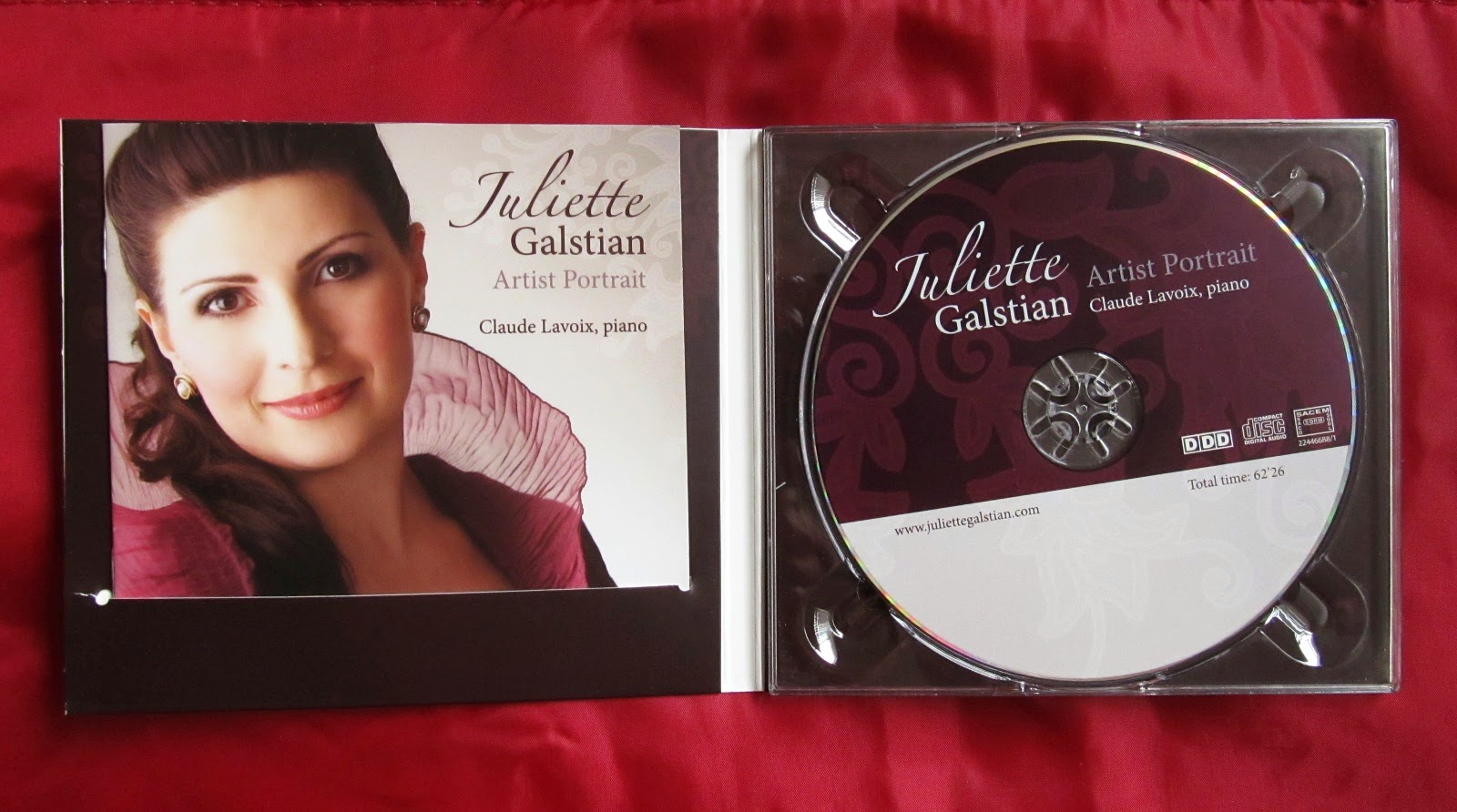 The disc contains 23 very diverse art songs in 7 different languages and styles ranging from Bellini to Strauss, Wolf, Tchaikovsky, Donaudy, Rubinstein, Gounod and even some intriguing Armenian folksong arranged by Vardapet. Heck, she even does a Britten in English!

Her voice has darkened some more (don't ask me how that was possible) with so rich a lower register now that I can't help wishing I could see her on stage as Carmen or even Marina in Boris Godunov... She goes so well singing the Russian songs!

Galstian is accompanied on the piano by Claude Lavoix, and it is a nice partnership of two very musical musicians. I'm afraid the beautiful booklet that comes with the disc doesn't have libretto, but her diction is clear enough to not need one if you understand Italian, French or English. CD is available for purchase through Galstian's website. A good Christmas present for your opera fan friends, if you ask me.
Posted by Smorg at 12:07 PM No comments:

Just another viewing of Der Rosenkavalier with Kasarova

I'm over-indulging in the Zurich Der Rosenkavalier DVD again. :D You know how uncannily Vesselina Kasarova (Octavian) dominates the stage during opera performances? Have a look just at the final duet here (starting at around 5:06 in). She has the entire auditorium so naturally covered with eye contact without even breaking character... I mean, contrast this with the gorgeous Malin Hartelius (Sophie).

The latter is a most exquisite Sophie (so poised, so amazingly sung, so still, I can't love her enough), but she theatrically disenfranchises just about all the audience on the right side of the house since she only ever looks/faces the left side of the auditorium). VK, on the other hand, has the whole hall scanned by the end of the first section of final duet, and she even does a final sweep (08:30-40) before turning up-stage and walking off with Sophie. It's so cool how she does that without breaking character. Sophie may be oblivious to your presence, but Octavian knows you're there and he isn't just singing for Sophie, but for you also ... no matter where you are in the house!

What can I say? The gal is a genius!