My impulse got the better of me. Got up at 3:30am yesterday to a head cold, but had already announced my intention to go on a cycling trip to Borrego Springs to a few friends, so staying in bed was out of the question. It was 7am when I got off the bus at Harrah's Casino in Rincon and started shivering my way east over the mountain. Made it down to Borrego at noon and hurried right back up since I hadn't done this ride before and didn't know how long it was going to take to get back to Valley Center (the bus ride from there back home would take 3 hrs... and it already took me 5 hrs on the outward leg!).
Went as hard as I could up Montezuma Grade, which was a rather bad move since the last 1 1/2 miles of that thing was the steepest pitch at 8%, and dead into 15 mph headwind. Luckily all but 1 1/2 miles of the rest of the way back was downhill and I made it back to Valley Center a bit past 4pm. Now my legs and back are dead... but I've got lots of great photos and memories for it. Will have to write this up properly in a few days.
Posted by Smorg at 9:05 PM 6 comments:

Well, 2013 sort of started on a bit of a hiccup for me. The apartment's internet modem is officially fried. I don't know how... we don't even have a working heater in the place!

Anyhow, that made properly posting stuff online a bit inconvenient. The good news is that the replacement modem should be arriving tomorrow or Wednesday, however, so there is a happy fully wired bliss looming in the future for me.
We've had a really nicely dry if rather cold week. I mean, it got so cold here a few days ago that people had to actually put on a sweater to go outside!

What's the San Diego climate coming to??? A week ago we were out walking around in t-shirt and jeans (and some even wore shorts). Now we're all bundled up in long sleeved sweater! Wimpy me even had 4 layers and a pair of ear muffs on when I got up early to go for a ride on Saturday morning. Granted 2 of the layers came off shortly into the ride (going up the steep first 3 pitches of Mt Helix tends to heat out-of-shape cyclists up in a hurry). I'm telling you, San Diego is almost fooling me into believing that it has more than one season in a year!

Okay, okay, enough needling of people who actually are experiencing legitimately cold weather... Last week a favorite classical music/opera oriented blogger friend of mine posted a link to this fascinating webpage with a really cool behind-the-scene video of what goes on behind the stage during a live performance of one of the most complicated opera on the repertoire, Wagner's The Valkyries, at the Royal Opera House. It is a really awesomely educational watch for me. I shall now appreciate it much better when things don't go wrong on stage during an opera performance... considering the boat-load of things that happen all at once!

I also made it to the Saturday performance of Mendelssohn's violin concerto and Nielsen's 5th symphony at Copley Symphony Hall on Saturday night. A good evening at the San Diego Symphony, which started off with opera fans-friendly overture from Rossini's La gazza ladra (The Thieving Magpie). I had been wanting to hear Viviane Hagner play live ever since I first saw the video clip of her playing Saint-Saëns' Introduction et rondo capriccioso with Zubin Mehta and the Israeli Phil on Classic Arts Showcase back around 2004. The lass was only 14 yrs old then.


She has since blossomed into a beautiful woman and a marvelous virtuoso violinist. The Mendelssohn concerto is, of course, played to multiple deaths ever since it premiered in 1845 for obvious reasons. It is just about as perfect a violin concerto as you can get, and it allows for quite a variety of interpretations. Everyone has their favorite version(s) of how this thing is performed, I think. I have a few... and must now add Hagner's communicative and nuanced performance of it to my short list. What can I say? It's wonderful to listen (and even watch) fantastic soloists who make musical dialogues when they could have gotten away with just showcasing their talents and visions. Hagner listened and reacted to the orchestra (San Diego Symphony under Jahja Ling) that was playing with her, and it responded in kind, and the music came alive and gave quite a zing to the evening.


The latter half of the concert was also a treat for yours truly. I had never heard any of Carl Nielsen's music before. It is quite a discovery and a nice stylistic contrast from Mendelssohn's ultimate romantic number. Many times when I go to the symphony I have felt quite let down in the second half of the performance when the SDO would regress to beautifully and correctly playing minus the communicativeness and the infusion of personality that the featured soloist had incited out of the band in the first half of the show. Saturday was quite different and in a very good way!

I'm afraid that's my blog update today. I've been at this internet cafe for many hours now, nursing my mug of hot cocoa until the last drop got nearly as cold as chocolate ice-cream, and the proprietor is starting to look at me funny. Really, if the internet modem turns up in the mail earlier than Wednesday I think I'll have to kiss the postman out of sheer gratefulness. Can't wait to be reliably wired on to the ethernet again!
Posted by Smorg at 4:16 PM 7 comments:

A Touch of Broadway: Paloma San Basilio Does Evita

It's a bit weird, but somehow Broadway musicals have been going well on my mp3 player when I'm our riding up endless upslopes in the eastern mountains. I know a lot of opera fans have quite a lot of disdain for one Andrew Lloyd Webber, but the man sure knows how to compose tunes that stick to your ears. One of his many hits is, of course, Evita's famous 'Don't Cry For Me, Argentina'.

Like many, there is no Evita like Julie Covington for me... but when it comes to the show's flag tune, she has serious competition in the Spanish version by Paloma San Balisio. I mean... how the heck does she sing like that with tears rolling down her cheeks anyhow?
Posted by Smorg at 8:35 PM 4 comments:

Hey, the year changed on us! Do you still catch yourself writing down 2012 when you have to write down a date on a sheet of paper or when you type one onto a form? 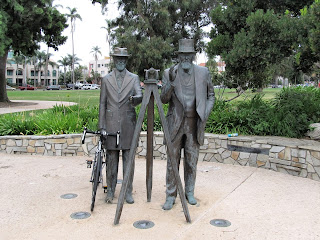 2012 sure was an eventful year. Yours truly moved to yet another apartment with another roommate (a real keeper, if you ask me), got a bicycle and ditched the cane - which means I'm speedier if not all that much more stable, I suppose.

I'm afraid I didn't go to enough concerts and performance arts events last year. Not because there wasn't any good show, mind you! Hopefully I'll manage to show up at the various concert halls and theaters more this year. The San Diego Opera is putting on five very different shows this season starting with Donizetti's operatic romantic comedy that is La fille du regiment (Daughter of the Regiment) on January 26th. It features L'Ubica Vargicova and Stephen Costello as Marie and Tonio. Even more irresistible for mezzophiliac me are the two supporting ladies in the cast: Ewa Podles as the Marguise and Carol Vaness as the Duchess.


It's winter here in America's Finest City, however, which means that the days are cold (or even cold) enough for long cycling rides in the eastern mountains. So when it isn't raining and the job isn't demanding too many daylight hours I am to be found huffing and puffing up the gorgeous roads east of town, preferably going up Mt Palomar by South Grade Road (S-6) and coming down East Grade (S-7) for a nice view of Lake Henshaw, or along the many mountain highways between the Poway and Julian... or in the mountains south of Alpine.

A lot of climbing... But that's how it goes, my friends. No pain, no view! The last time I went riding around the Great Western Loop (the big mountainous loop formed by Dehesa Rd, Japatul Rd, Lyons Valley Rd and Jamul Dr) I put the camera's video feature to good use and made the above video. Bonus points if you can identify the soundtracks!

Anyhow, thanks for stopping by. Hope 2013 has started well your way and keeps getting even better!
Posted by Smorg at 2:46 PM 4 comments: