What a year 2012 is already for Vesselina Kasarova! After a brief stay with Artists Management Zurich, Frau Kasarova is now represented by Munich-based Stefan Schmerbeck. This year she has portrayed Verdi's Eboli to Bellini's Romeo and, not many hours ago, Berlioz's Cleopatre, all in splendid form and drawing excellent reviews! Next up she goes on tour with Yordan Kamdzharov and the Helsinki Baroque Orchestra, starting at the Marktkirche zu Halle on June 3rd (see schedule for more dates)
In case you missed a few recent performances, here are recent recordings/appearances that are still freely accessible:
Video: - ZF : Aeschbacher - Mit Leib und Seele
Audio: - SWR2: Schwetzingen Festival concert with Charles Spencer
- Oe1: Berlioz's La morte de Cleopatre from Salzburger pfingstfestspiele.
Posted by Smorg at 5:59 PM 6 comments:

Hey, if you are in New York area on June 3rd and feel like catching a free afternoon concert... 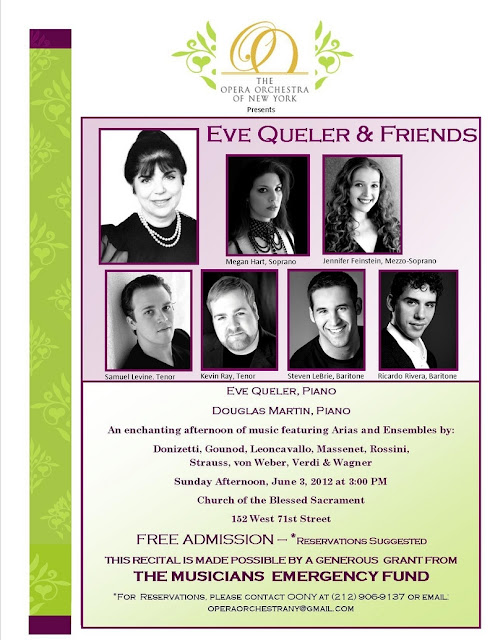 If only I live on the right side of the continent!
Posted by Smorg at 1:54 PM 2 comments:

April was quite an eventful month chez Smorg. There was a lot of work to do, both the nerdy and the not so nerdy kinds. Then I caught a nasty flu that caught the flu vaccine totally off-guard and lost me 6 lbs and many work days.

Then, out of the blue I had family reunion, called on a very short notice. No worries, everybody's okay, and the meeting went well enough that I almost considered moving back to the Midwest again.... but most likely not. I mean, I like the Midwest and all, but the California coast has spoiled me a bit. Whenever I start to go crazy after spending way too many consecutive hours in a dark computer room (because the place hasn't got WiFi, so I'm cabled in, so to speak) I could hop on my big fat mountain bike and go off to enjoy views like this...

It takes a bit of riding to get to Sunny Jim Cave from where I am, but La Jolla scenery is always worth a bit of sweat. The air is always cooler along the coast, and the lack of Midwestern weather makes most days here ideal for cycling (and other physically taxing outdoorsy activities like hotdog chasing, planning and laying ambush on the ice-cream carts, not sharing granola bars with pleading squirrels, or attempting ferocious karate moves on the marauding sea gulls that are trying to help you finish your fish tacos).

Riding around town on the mountain bike has helped me recover some rather disturbing personality traits that I thought I had successfully shed and buried a long time ago. For one, I can't seem to ride leisurely... Don't get me wrong, I'm a very careful cyclist. I even stop at stop signs and signal before I turn... but let me a bit of space on the pavement and sooner rather than later I'd get into a time trial mode... on a mountain bike (and that, my friends, is pathetic... mountain bikes don't go!). It's bad enough zooming my way down the many wonderful hills in town, but I even try to sprint uphill whenever I could.
Of course, there are a few hills around here that you just don't sprint up. Some are so uncivil you can hardly walk the bike up them!

It should surprise no one, then, that every now and then my legs would say enough is enough and perform a very good imitation of the rigor mortis in protest. On days like that, all I can do is to coast down to the San Diego River to the friendlier company of the California sunflowers...

or into the delightfully flat downtown to catch some culture...

The San Diego City Ballet was giving a free preview of their upcoming performances of Cinderella and Romeo and Juliet (the Prokofiev one) at the PGK Project's Dance on the Edge in Little Italy two weekends ago. 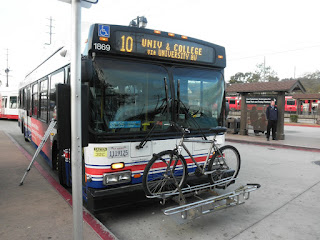 ... before catching a ride home on a bus.

It's terrible! I have this mountain of books that I want to read, but haven't managed to yet because it is way too nice out to stay inside for long. Then when I come back from one of these rides I'm too spent to concentrate on a book. 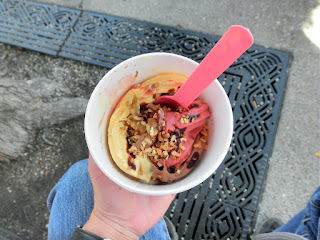 Maybe I should move back to the Midwest after all. It'll soon be too hot and humid there to even walk a block to the frozen yogurt shop let alone out for a bike ride!

On the other hand, there is nothing quite like the independence of getting to places on your own power and at your own pace. By the way, did you know that May 14-18 is the National Bike To Work Week? See that delicious cup of frozen yogurt I had down in Little Italy (yup, all that chocolate and cheesecake and red velvet chocolate cooler with assorted nuts and hot fudge topping)? It's a lot easier justifying such a treat when you bike to and back from the shop than getting there on gasoline!
Posted by Smorg at 8:57 PM 6 comments:

Email ThisBlogThis!Share to TwitterShare to FacebookShare to Pinterest
Labels: Around town, bicycling, off the main road, san diego, smorg

May is a good month for Vesselina Kasarova fans!

Hello! Hello! I know many opera fans don't appreciate Vesselina Kasarova, but if you keep on reading my rambling blog then my Kasarovaphilia is something you just have to put up with every now and then.

The White Shirt Republic's favorite mezzo has been in the news a bit this year. I suspect that she doesn't like the spotlight that much (considering how her interviews tend to turn up in the news under a rather provocative headline), but it's something she'll have to put up with in exchange for the publicity for her recently released book, I Sing With Heart And Soul. I haven't read it yet, though it's been sitting on my desk for the past couple of weeks like Sisyphus' glimpse at the hilltop escape from his laborious eternity of rock hauling!

Anyhow, Frau Kasarova's year seems off to a good start with two successful role debuts: the title role in Carl Heinrich Graun's Montezuma at Berlin's Schiller Theater and Principessa di Eboli in Verdi's Don Carlos at the Opernhaus Zurich. I envy those who are attending her joint concert with Krassimira Stoyanova at the Philharmonie in Munich today. Though for those of us who are unable to go to her performances there are a few goodies on television and the internet this month!


May 4th: If you are in Europe with access to the Swiss ZF channel, tune in at 5:40CET to catch her on Aeschbacher's show.
May 6th: Live internet streaming on the World Concert Hall of her solo concert with Charles Spencer from the Schwetzingen Festival at 1830GMT.
May 19th: Live internet streaming of a performance of I Capuleti e i Montecchi with VK and Anna Netrebko as the star-crossed lovers from the Bavarian State Opera in Munich. 1900CET, 1300EST.
May 28th: Live internet radio broadcast on Oe1 of the performance of Berlioz's La morte de Cleopatre from the Salzburg Whitsun Festival. John Eliot Gardiner conducts. With Vesselina Kasarova and Piotr Beczala.

With thanks to all the Kasarova fans for all the tips!
Posted by Smorg at 10:18 AM 8 comments: