Euromaxx's Bulgarian Encounters television documentary series hosted by Vesselina Kasarova aired in 2008, so I was surprised to find that the videos are still alive and active on the Deutsche-Welle archive! Anyhow, if you missed it, here are the links to the 6 clips (they're about 5 minutes long each): 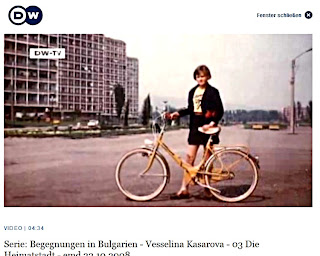 1. The Artist: VK arrives back home for a visit. Cool chat with her one and only voice coach, Prof. Ressa Koleva, recounting some early roles and performances. A little rehearsal snippet from Berlioz's La damnation de Faust from 1999 Salzburg Festival.
2. The Opera: VK visits Sofia Opera House where she began her singing career. They still have her Nabucco costumes! A look at the (then) newly renovated auditorium, and a bit from her masterclass.
3. The Home Town: VK visits her hometown, Stara Zagora, meets old instrumentalist friends, show off the town's modern bar, the opera house, old Roman auditorium, town centre & park.
4. The Cuisine: A trip to the town's farmers' market before tossing up delicious Shopska salad and an impromptu jamming session of the folksong 'Melodiya' with her harpist & flautist pals.
5. The Wine: A visit to the Katarzyna Winery, whose sweet red caused her to break into song ('Kalimanku, denku').
6. The Rose Oil: How rose oil is made at Bulgaria Septopolis, the scent of Bulgaria!
Posted by Smorg at 11:40 AM 2 comments:

Even with our mild climate it is hard to not notice that spring is well settled in San Diego. Flowers groomed and wild are blooming and I am taking prophylaxis anti-histamine every morning in the hope of keeping my nose firmly attached to my face until summer arrives to clear the air of all the flying pollens. The best and worst place to be this time of year, of course, is among the acres of cultivated Ranunculus blooming at the famous Flower Fields in Carlsbad.

The fields are open to the public now until May 12th, though there is a $11 entry fee (add $5 if you want to ride in the tractor wagons). It's a little pricey, I know, but if you hadn't gone in there before it is quite worth it as a once-in-a-lifetime experience. Carpool if you can. There is a moderately big parking lot, but the place is so popular that you might have to circle around a bit. There is also a mall just a stone's throw away with restaurants and shops. I went by bicycle, of course, and must sadly report that they haven't got good bike facilities there. There are a few poles around you can lock the bike to, though.
Posted by Smorg at 6:36 PM 4 comments:

If it has been a while since you visited the national park close to you, dust up the sunscreen and the camera and find time to go next week. April 20-28 is National Park Week 2013, and you can get to all the national park near (or even far from) you for FREE!

Here in San Diego, the closest park around is, of course, Cabrillo National Monument. It is a gem of a park with spectacular view of San Diego Bay and the Pacific Ocean, excellent museums and gift shop, observation decks, hiking trail, awesome tide pools, the light houses, etc, etc, and it's less than 20 minutes drive from Downtown (and, for cyclist me, a good little warm up ride before tackling the beautiful tide pools hill).
The real thing is much more mesmerizing than the photos, of course, and, for one week starting tomorrow you can get in for free. Aren't we spoiled rotten in paradise or what???

Email ThisBlogThis!Share to TwitterShare to FacebookShare to Pinterest
Labels: announcements, Around town, nature, off the main road, san diego

Well, everybody must have heard by now that there were bombings in Boston yesterday, two at the marathon and one at the JFK Library. Kudos to the police and emergency personnel (and other helpful bystanders) on the ground for coping with such event as well as they did!

I feel a bit selfish, actually. I knew from the news coverage that 'everybody' wasn't okay, so I first hoped that my Bostonian friends and their friends and family were okay. It doesn't mean that I don't care if the people that I don't know are injured or killed, of course. But that's the way it goes; when things go awry one worries first about the people that one knows... then the strangers.

Lots of folks have commented online on the news of the bombing. Many are commendably thoughtful. As expected; however, there are also some callous morons already making jokes and/or making stupid speculations. It's weird how things like this goes. When you turn on the television and see a scene like what happened at the Boston Marathon you imagine yourself in the scene - safe and clear headed and knowing best what to do - a regular bullets/bombs repellent Superman. You don't imagine yourself laying dazed on the ground missing a limp or two while chaos breaks out in every direction.

I spent last Sunday volunteering at the Gran Fondo Campagnolo organized bike ride in Little Italy bit of Downtown San Diego, most of the time within a stone's throw from the finish line. So had bombs gone off there like they did at the Boston Marathon I'd probably be one of the bloody limp-less folks rather than a bomb-repellent super hero going around rescuing others... And that would really suck, no less because my beloved bike would have probably been totaled by the bomb, being parked in the valet lot right next to the finishing stretch. And I can hardly afford to buy a new bike at the moment.

But that's quite beside the point; whoever set off those bombs did their 'message' or 'cause' no favor at all with such action. They hurt and killed innocent people who were out doing good deeds (much of revenue generated by events like this go to charity, and then there were those out to lend their support to others). Even the emotionless ones amongst us aren't going to care what message you want to send with the bombing. No message can justify such delivery method. Retaliation is what you're going to end up getting instead of any receptive hearing of your complaint. Like democracy, peaceful protest is the worst way of getting oneself heard except for all the alternatives. It is frustrating, but it is the only way!

Oh, before I forget... to the unharmed survivors; I'm glad that you weren't killed or hurt by the bombing, but please stop talking about how 'god' took it upon itself to protect you from harm. Whatever 'god' is or isn't it sure didn't protect those who actually got hurt and harmed by the bombs, and I am quite sure that those victims weren't any less worthy of a godly protection than you are. Peace out!

By the way, if you are in Boston area (or were expected to be at the marathon) and weren't injured by the bombing, please go and register yourself on the Red Cross' Safe & Well list.

Also, here's how you can help with the aftermath.
Posted by Smorg at 9:26 AM 3 comments:

Vesselina Kasarova is in South America. Yes, South America, concert-touring Brazil and Argentina with Florian Donderer and the Camerata Bern! I'm a bit crossed at American concert halls and theaters for not managing to get her to stop by and do a few concerts in the USA on her way there (or back), actually, but I'm nonetheless very happy for VK's South American fans for finally getting to experience this exquisitely unique Bulgarian mezzo live on their own continent.

Thanks very much to her South American fans for filling the venues and sharing their experience with the rest of us on the internet. Drop in at Bella's Unexpected Song Blog for her account of the concert and green room experience in English. More fan reactions can be found at VK's (unofficial) facebook page (you must be signed into facebook to view it), too!

Only Two More 'Murder at the Cathedral' at San Diego Opera

I'm running around a bit this week, though just wanted to mention that there are two performances of Pizzetti's Assassinio nella cathedrale (Murder in the Cathedral) left at the San Diego Opera.

If you are in town and feel like catching an evening of good music and memorable theater, drop in at the Civic Theater in downtown April 5 and/or 7!
Posted by Smorg at 2:14 AM 2 comments: