Well, Thursday sure was a lot more interesting than I had anticipated. The day started on a rather good note with more blog update from Den!s, the extremely generous Kasarova fan in Moscow who has been fortunate enough to spend the last 3 days with The White Shirt Republic's favorite muse as she prepared for her first ever concert in Russia. Den!s was armed with a camera and made very good use of it...

Quite a few videos of VK in Moscow have popped up on Youtube, so I went around bunching them all up into a single playlist for easier access... here.

The sweltering heatwave that had been upon us here in Southern California wasn't quite done with its business, though, and the thermometer mercury wasted no time bubbling up into the 90F region by noon time. I could hardly think when it gets like that. I was expecting the two Mormon missionaries to come over for lunch around 1PM, so I was sort of expecting to be doubly grilled by the late afternoon. 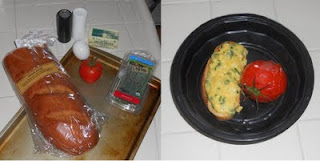 What's a Smorg to do but to opt for the easiest brunch menu imaginable? Scrambled eggs on toast. I threw a bunch of tomatoes into the broiler and looked out the window to be delightfully surprised by the sight of not two but three cute young lasses making a beeline straight for my pad. Better yet the unexpected third Mormon gal was a dead ringer for the marvelous Latvia operatic mezzo-soprano, Elina Garanca. A split image right down to the hair style!
Of course, she wasn't Elina Garanca, but she did turn out to be the most adept of the three in some outside-the-ideological-box thinking. Alas, I'm afraid I'm still not proficient enough at relating to them the reason why I no longer find the notion of an emotional god (rather than a naturalistic and impersonal one) reasonable enough to merit believing in... And that 'God is your father and he loves you,' makes as much sense to me now as 'Oud is your father and he loves you,' does.... That's nice, but what the heck is Oud/God??? We had a good discussion, though, and I am quite happy that they don't seem to find me too obnoxious to discuss things like their religion with. We have a church date set for this upcoming Sunday. I'm sure it will be interesting!
My Mormon friends left just before 3PM and I was just settling down to answer some emails when, poof, the power went out. We didn't have any notice of planned outage due to SDG&E maintenance or warning of possible heat-induced rolling black out, so I figured it was probably some minor problem that would be fixed in a few hours. After a while, though, words got around that the power outage was affecting the whole San Diego county, so I switched on the radio for news updates.

The news was rather startling... A utility worker at an electrical substation near Yuma, AZ made an error during a maintenance procedure, and that resulted in tripping out the only high voltage power line leading into San Diego from the east. The outage then threatened to overload the nuclear reactors at San Onofre, which supply the only other set of power line running into San Diego (this time from the north), so they had to shut those reactors down as a safety precaution. The result? Complete power outage in all of San Diego County, Imperial County, part of Orange County, and Southwestern Arizona, and most of Baja California.

Whoever designed the redundancy safeties for our power grid has some redesigning to do, I gather.
There were lots of good experience during this unexpected period of darkness, however. The next door neighbor who has a gas-run generator came round and allowed my roommate and I and a couple other neighbors to hook our refrigerators up to it to keep our food from spoiling. A bunch of neighbors who don't normally get to visit with each other a lot came out and lounged around a lantern in the common driveway listening to the battery-operated radio, enjoying the company and the return of the cool evening breeze. The night was so beautifully dark with the absence of street and house lights that we could see a lot of constellations in the night sky. We were expecting to be without electricity well into late Friday when, voila, the light came back on half-way through midnight. Those electrical engineers over at SDG&E really performed miracles restoring power to most of the affected area by Friday morning!

Considering that the outage didn't last longer and that the heatwave was essentially over a couple of hours after the loss of electricity, we mostly dodged a big bullet last night. I'm afraid a lot of folks were stuck at various parts of town since the trolley system was down and so were most of the gas stations. All outgoing flight from Lindberg Field was canceled and many inbound ones were diverted elsewhere.. And no civil disorder... (but then again, the episode only lasted one evening/night. Who knows what would have happened if it had gone on for days the way Irene-induced black out went on the upper East Coast?).
Posted by Smorg at 12:25 PM

ah! mister Smorg, what a strange Thursday, huh? yours was full of excitement as i can read, glad that we have power now, but, i must confess i liked the quiet night :) herr Gato was happy with the loud crickets not obscured by TV sounds, and Frau Kitty just kept staring at the bright moon, maybe we'll turn off the lights again tonight ;)

Thank you so much for the "bunching" !
I think I may have died and gone to heaven ( whatever that is !) .... Surrounded by books and now all this. Sigh of contentment.
Glad to hear that all aspects of your interesting day had a good outcome ;)